Monclova resident killed in action at Port Republic in 1862

I have a tradition on every New Year's Day of taking a walk at Oak Openings Park as a way of re-focusing myself for the year ahead. We were fortunate in that this year it was sunny and clear if a bit cool and the walk, as always, was invigorating.

On my way home, I drove along U.S. 20 in Monclova and passed by Swan Creek Cemetery. It triggered a memory from long ago back in my Civil War re-enacting days. Adjacent to the road is a small monument dedicated to the residents of Monclova Township who died during the Civil War. Driving by and seeing the eagle atop the monument it triggered the memory of helping to re-dedicate this monument back in 2000. 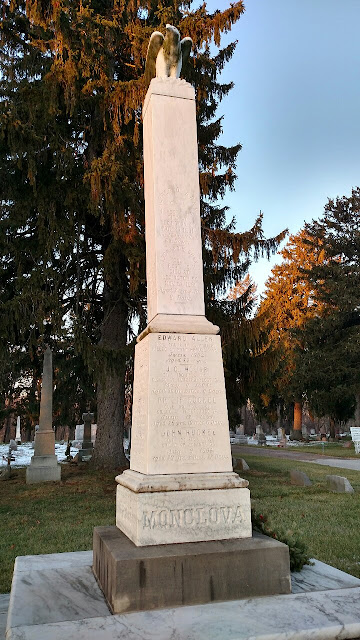 At the time, I was a "high private in the rear rank" of the 14th Ohio/3rd Arkansas. The Monclova Historical Foundation had paid for the restoration of this nearly forgotten monument which had been erected in 1870, just five years after the war. We (our group) were invited to be part of the wreath-laying ceremony. Checking online, this event occurred May 29, 2000 at 10 in the morning- other than being there and part of the event, I can't say I remember much in the way of details except 1) it was sunny, 2) it was hot, and 3) I was very thirsty as a result. It was one of my first events as a re-enactor and it felt good to be paying tribute to the men in blue.

This year, I took a few moments to visit the monument and read the names of the men. Four brothers with the last name of Ruckel died within a few months of each other in 1864- I can only imagine how devastating the loss had to be for the parents of these brave men.

My attention was also drawn to the name of Edward Allen. He served with Battery H of the 1st Ohio Volunteer Light Artillery and lost his life during the Battle of Port Republic, Virginia on June 9, 1862. His name sounded familiar, and after digging into my research files, I found out why. The following letter was written by Second Lieutenant Martin B. Ewing of Battery H eight days after Port Republic, and he mentions that Sergeant Edward Allen was killed at his piece. 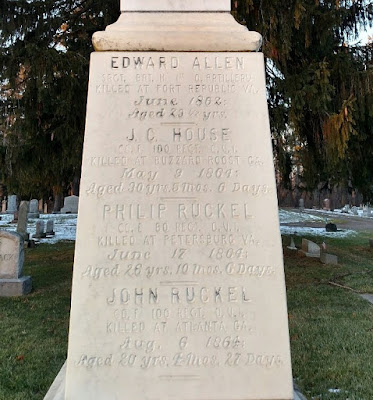 Front Royal, Virginia
June 17, 1862
We all wish you were here, though I am thankful you were not with us to share in the terrible peril we were in for four hours at Port Republic. Our battery did splendid service there. Most of the time we fired shell, but towards the close all but C’s gun fired canister at less than 300 yards. C’s last shot was a Shenkl shell, thrown beautifully into the head of the 7th Louisiana, scattering that noted regiment like sheep. In trying to load with canister, they got a charge fast and we had to move the gun to the rear. General [Erastus B.] Tyler ordered me to take position on a little rise in the road some 400 yards in the rear of the line of battle with the gun so as to cover the retreat, if possible. Our whole fight was little better than a massacre. We had not troops enough to cover the position. On our right were wide wheat fields through which they charged on three of Clark’s guns and two of ours. On our left was a high ridge densely covered with pine and laurel undergrowth through which a brigade came up without being seen until they were within 100 feet of our guns and began firing down on us.
Clark with three guns (two of ours and one of Robinsons’s) swept the woods at once with canister and cleared it twice. Then they rallied again and fairly overran our little force. Columbus Cilley and Charley Fee loaded and fired D twice after the Rebels had taken Clark’s guns 50 feet to their left and after Cilley had been shot through the right arm, they limbered up with Arnold’s help and Fremont Wolcott’s and brought the gun off. The iron axle had been broken, however, and after going about three miles, they had to leave the gun as the carriage broke down completely. They plugged a solid shot down to the bottom of the bore with a stocking around it, and filled the gun up with stones, the rammer, etc.  Davenport’s men brought away one of Clark’s guns after he and all his enemies had run, and we also brought away a Secesh smoothbore six-pounder captured on the right by “Scotty,” a notability of the 5th Ohio Infantry.

Sergeant Edward Allen and John M. Gill were killed instantly at the pieces. Billy Pierce had his left leg fractured by a rifle ball so that the leg had to be amputated above the knee. George Aikins was wounded through the leg. Is it enough that Harrison, Huggs, Berry, and Ramsey are missing. We know nothing whatever about them. Charley Robinson was left on Sunday and nothing was heard of him until today when the captain told me he had seen a captured cavalry lieutenant who said they took a lieutenant of artillery prisoner Sunday morning slightly wounded. As he was the only one to answer the description, it must be him. Our retreat was rapid but very orderly and over the most execrable road you ever saw. 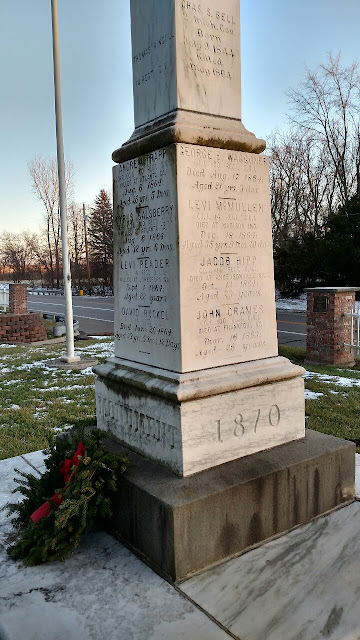