Showing posts from September, 2021
Show all

Back from the Dead: The 11th Ohio Battery at Corinth 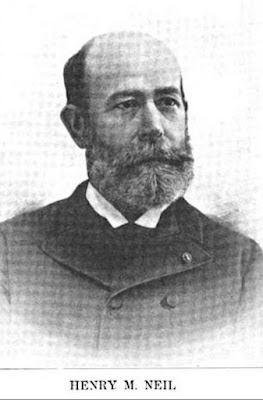 The smoke was pouring from the battlefield north of Corinth, Mississippi on the hot afternoon of October 3, 1862 when Colonel John B. Sanborn of the 4 th Minnesota spied a sight that he remembered vividly 22 years later. “Amid the hurrahs and tears of the infantry that had seen it destroyed under the terrible fire of the 19 th of September” rode Second Lieutenant Henry Moore Neil at the head of the 11 th Ohio Battery. Now re-quipped and with his ranks filled with volunteer infantrymen from General Napoleon Buford’s brigade (including Sanborn’s 4 th Minnesota), Lieutenant Neil had rushed his battery into Corinth without an escort to take part in the battle. The astonished infantrymen “now seemed to feel that the battery men, horses and all, had come back from the regions of the dead to aid in the terrific struggle now going on between the same armies,” Sanborn wrote. Captain Henry Moore Neil served with the 11th Ohio Battery through Iuka and Corinth, then was promoted to comman
Post a Comment
Read more

Slaughtered at Fredericksburg: A Voice from the 4th Ohio

Writing to his sister Estelle Richardson, newly minted Second Lieutenant Channing L. Pettibone of the 4 th Ohio Infantry lamented the heavy and fruitless casualties sustained by his regiment at the Battle of Fredericksburg. “This is the first time I have had a moment’s time to write since the slaughter of our brigade,” he began. “Our regiment went into the fight with 90 men and had 45 killed and wounded. I was in the thickest of the battle and shot 60 cartridges at the graybacks and was not hurt. It was just like taking us to the slaughter to move us on those breastworks. We are in a log hut now with a cloth roof on it and a big fireplace in it; the beans are on, and I am hungry.”           Various reports differ as to number of men the 4 th Ohio took into battle (90 being the lowest estimate, 115 being the highest), but five officers and 43 enlisted men were killed or wounded, roughly half of a regiment that was already dangerously small. Fredericksburg was, as noted by Whi
Post a Comment
Read more 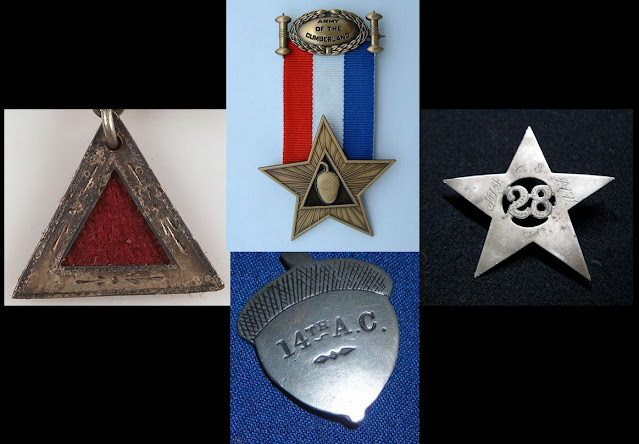 The various army corps badges belonging to units of the Army of the Cumberland from left to right: detail from a badge belonging to the First Division, Fourth Corps , the silver acorn of the Fourteenth Corps, and a star of the Twentieth Corps that belonged to a soldier of the 28th Pennsylvania Infantry. The badge at top is a reproduction Society of the Army of the Cumberland medal which features each of the badges of the three corps in its design: the triangle, the star, and the acorn.       Prior to the Atlanta campaign, only the 11th and 12th Army Corps sported the popular devices known as corps badges in the western armies.  The Armies of the Cumberland and the Tennessee were first introduced to corps badges when the troops of the two eastern corps arrived near Chattanooga in the fall of 1863. As recalled by William Bakhaus of the 47th Ohio, a 15th Army Corps regiment, his comrades marched near one of Hooker's camps and started to elicit comment from the well-garbed eastern
Post a Comment
Read more

Escaping the Hornet's Nest at Shiloh

Among the more notable areas of the Battle of Shiloh is the Hornet’s Nest, a position near the center of the Federal line that held against repeated Confederate attacks on the afternoon of April 6, 1862. It is one of the most visited points on the battlefield, it’s popularity no doubt enhanced by the 1956 National Park Service film “Shiloh: Portrait of   a Battle” which perhaps over-emphasized the importance of the Hornet’s Nest to the outcome of the battle. While a number of details of the fight remain in dispute (was the Nest charged 7 times or 13?), what is not in dispute is that around 5 p.m. that evening the survivors were surrounded and General Benjamin Prentiss surrendered about 2,200 men, most of whom did not belong to his command but that of General W.H.L. Wallace. Captain Erman Mastick of the 2 nd Iowa was one of those who escaped capture at the Hornet’s Nest and wrote the following vivid letter to his parents describing his escape. “We drove them back but not without hard
Post a Comment
Read more

A Sharpshooter at Williamsburg 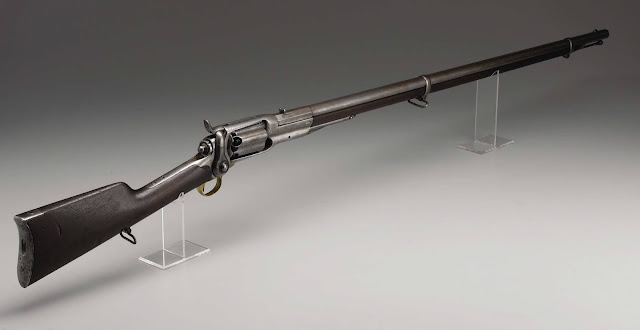 The Battle of Williamsburg, Virginia was the first major engagement of McClellan’s Peninsula campaign. Fought May 5, 1862, the battle was brought about when General Joseph E. Johnston detached a force to hold Fort Magruder to gain time for the remainder of his army to get on the road to Richmond. Pursuing Federals slammed into them, and the resulting fight racked up more than 2,200 Federal casualties and nearly 1,700 Confederate casualties.           Second Lieutenant Ira Smith Brown of Co. A of the 1 st U.S. Sharpshooters took part in some of the toughest fighting on the Federal right while attached to Brigadier General Winfield S. Hancock’s brigade.  “The enemy charged in splendid style. I never saw a finer sight. Three times advanced yelling like demons crying out ‘Bull Run’ ‘Ball’s Bluff.’ Eight rods in front of us was a rail fence. Only one man, a captain, crossed it. He fell dead. All that were left of the 5 th North Carolina, 23 rd North Carolina, and 24 th Virginia
Post a Comment
Read more

The 53rd Ohio and the Shame of Shiloh 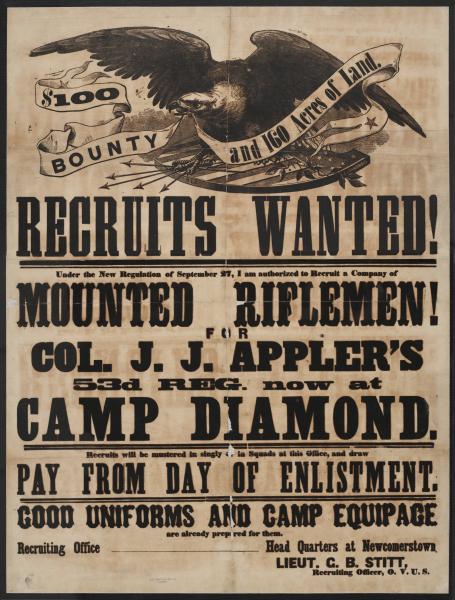 The 53rd Ohio, perhaps more than any other Federal regiment, was marked by what I would call "the shame of Shiloh." The initial newspaper reporting of the battle specifically called out the 53rd Ohio (among others) for running away without firing a shot, labeling the Ohioans cowards who "cut and run like so many sheep," and that men of the regiment were bayonetted in their beds; all of this was the purest bunk and a fine Civil War era example of "fake news," but the men certainly felt the sting of public criticism of their actions and chafed considerably at being labeled as cowards not only by the press, but by their own divisional commander William Tecumseh Sherman.  The confidence that the men had in Colonel Jesse J. Appler of the 53rd Ohio was destroyed in the opening moments of the Battle of Shiloh. Appler failed to meet the harsh test of Civil War combat and was branded a coward. No one could have predicted such a result during the heady days at
Post a Comment
Read more

The Final Minutes on Horseshoe Ridge 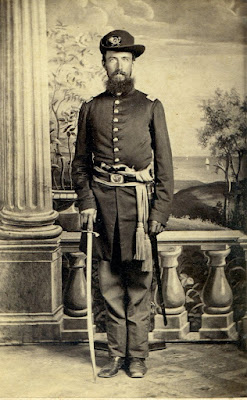 Throughout the afternoon of September 20, 1863, the 517 men of the 21st Ohio held off repeated assaults against their position atop Horseshoe Ridge. As night fell, General George H. Thomas ordered the Federals to retreat off the ridge and march towards Rossville. Those orders never reached three regiments: the 89th Ohio, 22nd Michigan, and the 21st Ohio. Thus the final minutes of the Federal stand on Horseshoe Ridge were ones of confusion and disappointment as the remaining Federals found themselves surrounded. We will look at this event from the viewpoint of two participants, one wearing the blue and the other the gray: Sergeant John H. Bolton of Co. F of the 21st Ohio and James Miller Weiser of Co. F of the 54th Virginia. Sergeant John H. Bolton of Co. F of the 21 st Ohio had served as ordnance sergeant for the regiment, riding his horse back and forth from Snodgrass Hill to the ammunition wagons behind the line in a desperate attempt to keep the boys supplied with bullets f
1 comment
Read more

This Dreadful Carnage: A Word from the 58th Alabama

The 58th Alabama saw action for the first time at the Battle of Chickamauga in September 1863. "If the conduct of the regiment on Saturday was gallant, on Sunday it was heroic," wrote its commanding officer Colonel Bush Jones. "Though the regiment was never in a battle before, its bearing was that of veterans. The heavy loss in killed and wounded mournfully attests to its gallantry and heroism and its readiness to face danger in obedience to orders." The 58th went into the fight with 30 officers and 258 enlisted men and suffered 56% casualties at Chickamauga: 162 of the 288 present were shot down, 26 of them killed, 136 wounded.        It was the daring charge upon the entrenched Federal line that the 58th Alabama took part in on the second day of the battle that gutted the regiment. "The regiment started with 300 men and in one hour from the first yell, only 102 could be mustered for duty," one of its survivors noted. "The failure was not their f
Post a Comment
Read more

The 11th Ohio Battery's Blood-Stained Ledger: The Shadows of Iuka 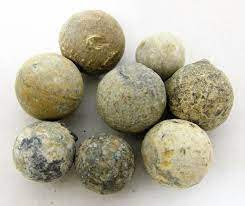 Despite the ghastly nature of the wound that carried away a portion of his lower jaw at the battle of Iuka, Private Henry M. Welsh of the 11 th Ohio Battery still maintained his wry sense of humor. Writing from the city hospital in St. Louis, Missouri nearly a month after the battle, he described what happened. “While the Butternut bullets were buzzing through our battery and about my head like so many hornets when their nest has once been disturbed and as the smoke from our cannon drifted away a little, my attention was suddenly drawn by one of those Butternuts who was standing 15-20 feet away from me and the devil had the impudence to discharge his musket in my face before I had time to tell him not to point his gun toward me,” the Ohioan noted. “He was so awkward about it that the bullet, about the size of a hickory nut, entered the left corner of my mouth, shelling all the ivory of my lower jaw except four snags, not down my throat but through the right side of the chops
Post a Comment
Read more
More posts