Showing posts from August, 2020
Show all

The Desperate Unceasing Battle: the 61st Illinois at Shiloh 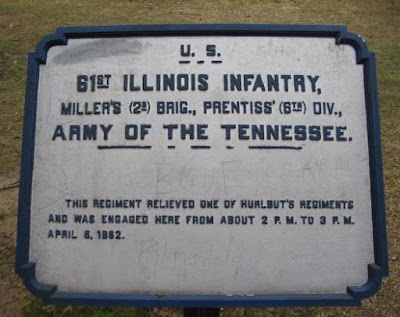 Today's blog post features an intense first hand account of the Battle of Shiloh as seen by Private Peter D. Whitsel of the 61st Illinois. The 61st Illinois was part of Colonel Madison Miller's brigade (the Second) of Benjamin Prentiss' Sixth Division; about midway through the fight, the 61st Illinois was detached from the brigade and sent to support a battery on the far right of the division. This assignment proves the salvation of the regiment as it allowed them to retreat safely and not be scooped up when Prentiss was surrounded that afternoon.  Whitsel's story was featured in the September 17, 1896 issue of the National Tribune . “An April Sunday: Desperate, Unceasing Battling on Shiloh’s Field”           “Co. H, turn out!”           “Why can’t they let us eat in peace? This is the third time we have been ordered out before sunrise, and here only a week.”           “Right face by fours! Forward! Double quick! March!”           Evidently the
Post a Comment
Read more

Storming the Ramparts of Arkansas Post with the 120th Ohio 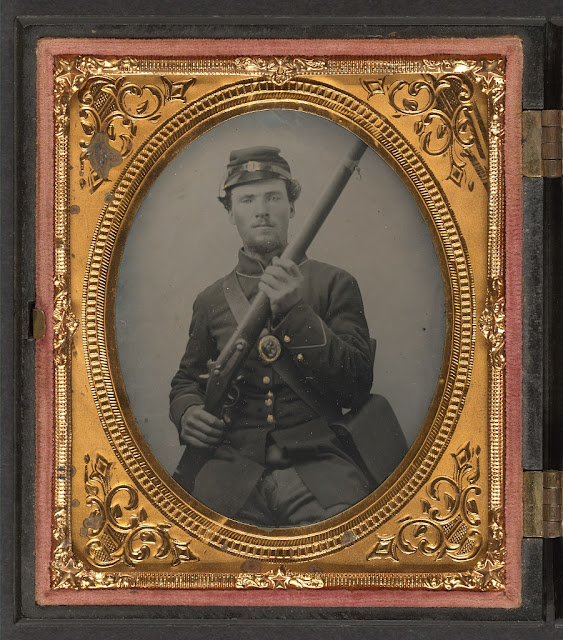 The experience of the Federal army in the assault and capture of Fort Hindman (also called Arkansas Post) couldn’t have been more different than what they experienced at Chickasaw Bayou just a few weeks earlier. The bloody and demoralizing defeat at Chickasaw Bayou had gained nothing but a lengthy casualty list and had shaken the army’s confidence in Sherman’s leadership. With General John McClernand now in command, an army of about 25,000 Federals were sailed up the Arkansas River to take the post and garrison of Fort Hindman. Preceded by bombardment by Federal gunboats, McClernand deployed his men to two wings, the right under General William T. Sherman and the left under General George W. Morgan, the two wings wrapping entirely around the fort and penning up the 4,900 Confederates within the fortifications. On January 11, 1863, the Union army moved in to assault the fort and took it after a short but bloody fight, the Federals suffering about 1,000 killed and wounded but captur
1 comment
Read more

Prelude to an Awful Finale: A Buckeye Sergeant at Chickamauga 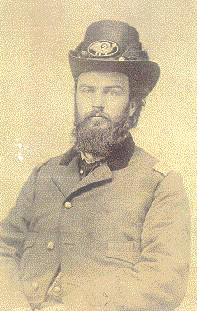 A few weeks ago, I shared a letter from a gunner with Battery H of the 5 th U.S. Light Artillery that described how his battery was overrun at the Battle of Chickamauga. (see post here ) Today’s blog post features an account from Orderly Sergeant Samuel Berryhill Price who served in Co. A of the 2 nd Ohio Volunteer Infantry and who was caught up in that same Confederate attack on the morning of September 19, 1863. Lieutenant Colonel Obediah C. Maxwell, 2nd Ohio Infantry Wounded at Chickamauga and discharged for wounds in February 1864 The 2 nd Ohio as part of Colonel Benjamin Scribner’s First Brigade of Absalom Baird’s First Division of the 14 th Army Corps was in the same part of the field as Battery H and likewise was driven from their position by Govan and Walthall’s assault. During the vicious fighting at Chickamauga, the 2 nd Ohio lost Lieutenant Colonel Obadiah Maxwell wounded, then Major William T. Beatty was wounded and captured leaving the regiment under comman
Post a Comment
Read more

Losing the Colonel: The 68th Ohio at Champion Hill 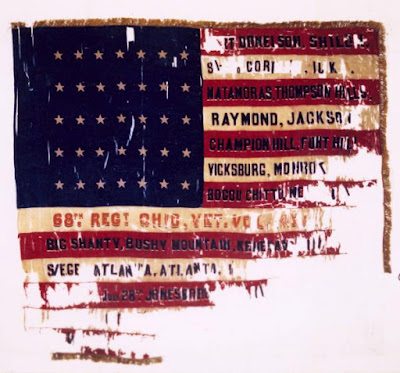 A few facts are abundantly clear: Lieutenant Colonel John S. Snook of the 68th Ohio Volunteer Infantry was killed in action May 16, 1863 at the Battle of Champion Hill, Mississippi. His loss was widely lamented throughout the regiment; Snook was a beloved commander and remembered as a fervent Christian gentleman. The surviving accounts amply attest to how his death cast a gloom over the regiment despite the victory at Champion Hill. But how did he die? Well, that depends on who you ask. Tattered national colors of the 68th Ohio Veteran Volunteers with the battle honor for Champion Hill in the third red stripe. (Ohio History Connection)      John S. Snook was born December 5, 1814 in Deerfield, Warren County, Ohio and prior to the war had settled in Paulding County, Ohio, relatively unsettled territory still largely covered by forests. John Snook was a community leader, raised and led Co. G of the 14 th Ohio Volunteer Infantry in the three months’ service in 1861, then work
Post a Comment
Read more

Veterans Medal from the 67th Ohio 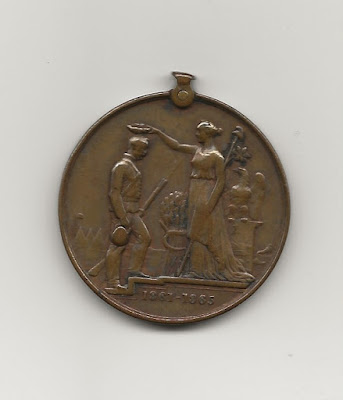 I was fortunate recently to be able to acquire the planchet of the Ohio Veterans Medal that was issued to Private Jacob Hiller of Co. C of the 67th Ohio Volunteer Infantry. On April 2, 1865, as the 67th Ohio Infantry was engaged in storming Fort Gregg at Petersburg, the General Assembly of the State of Ohio authorized Governor John Brough to acquire these veteran medals (as detailed in the certificate below) and pursuant to that resolution, Brough contracted with Tiffany & Company of New York to produce them. The medals were struck on bronze planchets and clasps with a silk ribbon attached. The design was striking, showing "Ohio personified"  crowning the veteran with a laurel wreath.  All told, about 20,000 of these medals were produced, individually inscribed, and issued in 1866. Although evidence suggests that some veterans traveled to Columbus to acquire them, most were apparently mailed to the veterans.  A certificate was included with the medal, the text of wh
Post a Comment
Read more

With the 1st Ohio at Missionary Ridge 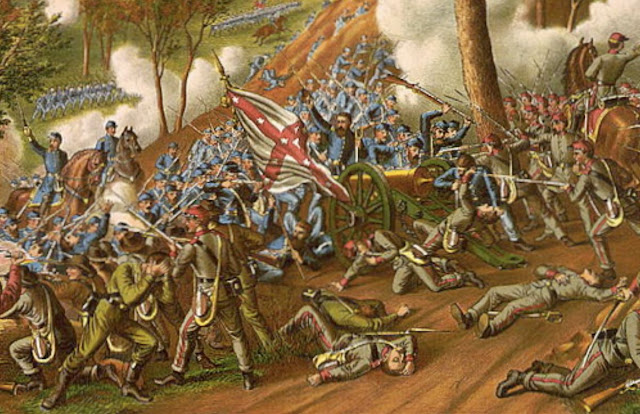 " The reverse at Chickamauga is retrieved with interest compounded." Harry Comer of Lancaster, Ohio made no bones of being an exceptional soldier; reading his correspondence one gets the sense that Comer was just "one of the guys." When describing heroic actions on the battlefield, Comer took pains to notice the deeds of other men and never called for himself any special claim to fame. Indeed, Comer was wont to loaf on duty and in the summer of 1863 took French Leave (he returned home to visit with his dying father) and then spent several weeks in a Tullahoma guardhouse for his infraction. Missionary Ridge, Tennessee, November 25, 1863 One particular talent that Comer possessed was his ability to write, and we are fortunate that his nimble pen survived the carnage of the storming of Missionary Ridge such that we have his account of that charge. During the course of the war, Comer wrote a lengthy series of letters to the editor of the Lancaster Gazette descr
Post a Comment
Read more

A New Yorker at Port Hudson 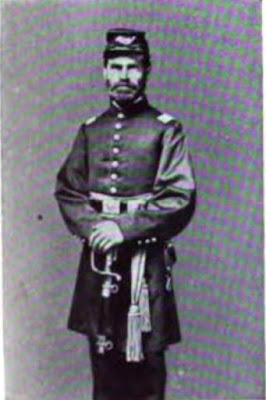 Robert Richford Roberts Dumars was born January 28, 1820 and died of Bright’s disease August 5, 1888 in Elmira, New York. Dumars was the editor of the Elmira Daily Press when he raised Co. C of the 161 st New York Volunteers for service in 1862. Before leaving Elmira, Captain Dumars was presented with an engraved Model 1850 foot officers’ sword which was sold through the Horse Soldier in Gettysburg recently. The 161st New York was raised as part of General Nathaniel P. Banks' army to drive north up the Mississippi River from New Orleans, and arrived in Louisiana in December 1862. Captain Robert R.R. Dumars Co. C, 161st New York Volunteers Captain Dumars and the 161st New York took part in the siege of Port Hudson and the battle of Donaldsonville, Louisiana before Dumars became ill and was placed on detached duty at the Elmira prison camp in New York. Captain Dumars served the rest of the war at Elmira, mustering out September 20, 1865. As mentioned in a history of t
Post a Comment
Read more
More posts