Showing posts from December, 2020
Show all

Swallowed by the Cedars: A Day with the 15th Kentucky In the Army of Tennessee, the Orphan Brigade consisted of a group of Confederate Kentucky regiments considered orphans due to the fact that their state did not officially follow them into the Confederacy. The Army of the Cumberland also had a Kentucky regiment with the orphan moniker, but for a different reason. In this case it was the 15 th Kentucky Infantry who gained the name of the “Orphan Regiment” due to having its field commanders completely struck down at the Battle of Perryville in October 1862, leaving the regiment “orphaned.”           The problem of who to appoint to take command of the regiment after Perryville was a knotty one; the field and line officers had taken such heavy losses that it was decided to appoint 19-year-old Louisville native Captain James Brown Forman as colonel. It was ironic that the young man chosen to lead Kentucky’s “Orphan Regiment” was himself an orphan; both parents having passed away before he was eight years old. But Forman had a solid claim
Post a Comment
Read more

On this blog, I have written quite a few posts about the opening moments of the Battle of Stones River, examining the events of the early morning hours of December 31, 1862 from the perspective of the men of General Richard W. Johnson’s division. Today we flip the coin and view the Confederate army’s dawn assault through their own eyes with a focus on the Texans of General Matthew Duncan Ector’s brigade of dismounted cavalry. Ector’s brigade consisted of the 10 th , 11 th , 14 th , and 15 th Texas Cavalry regiments. The 15 th Texas Cavalry Regiment (Dismounted) as it was known during the Stones River campaign is a misnomer; the regiment was borne upon the rolls of Texas as the 32 nd Texas Cavalry; the proper 15 th Texas Cavalry was also dismounted but at this period of time (December 1862) was based at Arkansas Post where it would be captured in early January 1863.             On Monday December 29, 1862, Ector’s brigade and the balance of General John P. McCown’s division marc
Post a Comment
Read more 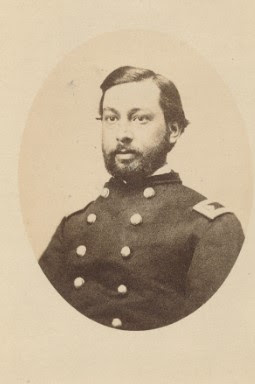 The record of the 15th Pennsylvania Volunteer Cavalry during the Stones River campaign, also known as the Anderson Troop, is perhaps the most mixed up of any regiment in either army. Before the campaign even began, a significant number of the men of regiment refused to march, they mutinied, and Major Adolph Rosengarten led only roughly 300 men of the regiment south. Within days, both Rosengarten and his second in command Frank Ward were  dead from battle wounds, the Troop was under the command of a captain, and the troubles with the mutineers at Nashville continued. However, during the campaign, two members of the Troop so distinguished themselves as to be awarded the Medal of Honor (Private John Tweedale of Co. B and Private John G. Bourke of Co. G), while two other members of the Troop (Sergeant Henry C. Butcher of Co. C and Private Samuel B. Holt of Co. L) captured a Confederate battle flag belonging to the 3rd Alabama Cavalry.      The focus of today's post however is th
Post a Comment
Read more
More posts