Showing posts from November, 2018
Show all

Ditching the Cards: The 31st Ohio Marches Towards Stones River 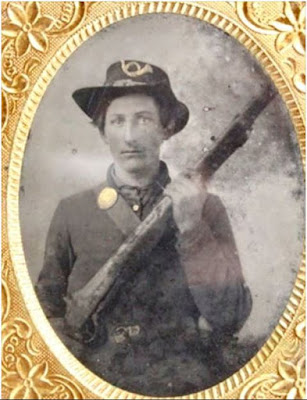 This week’s blog post features an account from the pen of Private Samuel A. McNeil of Co. F, 31 st Ohio Volunteer Infantry who shares his experience of marching towards the front through the flotsam of battle on the morning of December 31, 1862 at the Battle of Stones River. Lieutenant Colonel Frederick W. Lister commanded the regiment which was assigned to the First Brigade, Third Division of George Thomas’ Center Corps. Colonel Moses B. Walker commanded the brigade which consisted of the 82 nd Indiana, 17 th , 31 st , and 38 th Ohio regiments, of Church’s Michigan battery (Battery D, 1 st Michigan Light Artillery but also referred to as the 4 th Michigan Battery). Unknown Ohio Private      Through the evening of December 30 th and the predawn hours of December 31 st , Walker’s Brigade marched from Nolensville to Stewartsborough (near Smyrna, Tennessee) and at dawn was guarding a bridge over Stewart’s Creek. Colonel Walker received an order shortly after dawn to
2 comments
Read more 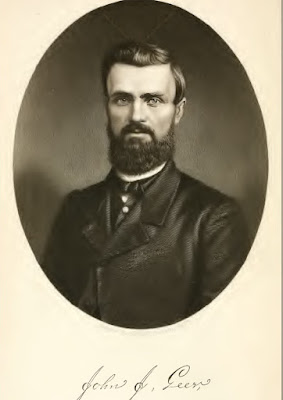 Virginia-born John J. Geer was a hard-hewn “sunburnt, hard fisted, and plain worded” minister of the Gospel, and leader of the George Street Methodist Protestant Church in Cincinnati when the Civil War began in April 1861. “When the news of the outrage was received at the Queen City, he vowed that he was a United States soldier until either himself or the rebellion should be crushed,” his friend Rev. Alexander Clark wrote in 1863. “He engaged in the war not for position or popularity, but as a soldier.” Geer was commissioned a lieutenant in the 48 th Ohio Infantry, and shortly after taking the field he was appointed assistant adjutant-general on the staff of Colonel Ralph P. Buckland of the 72 nd Ohio Infantry. Buckland commanded an all Ohio brigade consisting of the 48 th , 70 th , and 72 nd Ohio regiments. First Lieutenant John J. Geer, Co. K,  48th Ohio Volunteer Infantry Lieutenant Geer ably tells the story of his capture two days before the Battle of Shiloh when t
Post a Comment
Read more

A memoir of Civil War reenacting 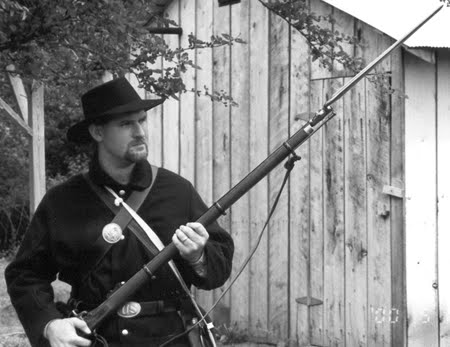 This week's post is outside of my normal scope of writing, but as I was going through my hard drive I stumbled across some great photos and some old newsletters dating back to my life as a Civil War re-enactor back in the early 2000s. I "served" (and I use that term carefully with full regard for the actual service rendered by our veterans) for six years as a high private in the rear rank of the 14th Ohio/3rd Arkansas unit which was based in the Toledo area. We were a very active group for a number of years, taking part in many living history events, talks, parades, and reenactments each year. Looking back on it, I really enjoyed the time I spent in the unit and developed some friendships and connections that have continued long after my days in the blue uniform where over.  The author as a very young and determined "High Private in the rear rank" brandishing my deadly Enfield rifle and gleaming bayonet, the terror no doubt  of many a Rebel opponent. Con
Post a Comment
Read more

Music of the Spheres: The 11th Ohio Battery at Battle of Iuka 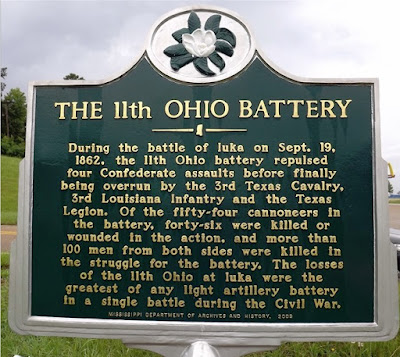 The primary focus of this research log since its inception last June has been to discuss and bring forth hitherto rarely used or forgotten accounts that illuminate the sacrifice and heroism exhibited by Ohio’s soldiers on the battlefields of the Civil War. History records few more poignant examples of these traits than the struggle of the 11 th Ohio Battery at the little-known Battle of Iuka which was fought September 19, 1862 in the wilds of northeastern Mississippi. “The 11 th Ohio Battery entered the fight at Iuka with 102 officers and men, and of these 18 were killed and 39 wounded, many mortally. Of the cannoneers alone, 46 out of 54 were killed or wounded. Fox’s Regimental Losses in the Civil War states that the losses of the 11 th Ohio at Iuka were 22% greater than that sustained by any other light battery in any one engagement during the war.” (Ryan, Daniel J. The Civil War Literature of Ohio . Cleveland: The Burrows Brothers Company, 1911, pg. 267) 11th Ohio Battery
1 comment
Read more
More posts