Showing posts from May, 2020
Show all

Cleaning Out Bragg: Vignettes from the Tullahoma Campaign 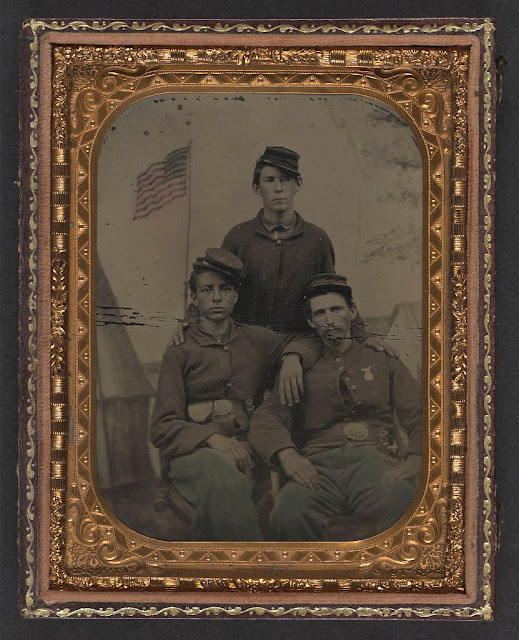 The Tullahoma campaign, which took place in middle Tennessee from late June through early July 1863, has not received its just due in the pantheon of Civil War literature, in large measure due to timing (during Gettysburg and the close of the Vicksburg campaign) and the fact that the campaign was largely one of marching and maneuver, not of hard-fought titanic-sized battles with lengthy casualty lists. In many ways, Tullahoma could be considered as General William S. Rosecrans’ masterpiece: he successfully maneuvered General Braxton Bragg’s well entrenched Army of Tennessee from its positions along the Duck River and eventually out of Tennessee altogether, and at a small cost in lives. This goal of securing Tennessee for the Union, and particularly the rich foraging area of middle Tennessee, was an important step in bringing the war to the deep South. A group of three Union infantrymen displaying various types of coats including a shell jacket and the common sack coat. The youth
Post a Comment
Read more

Bullet Dodging at New Hope Church with the 93rd Ohio 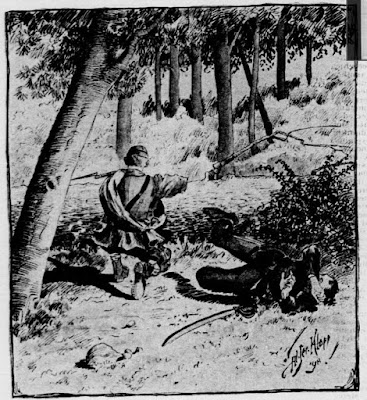 The following account from Private Daniel W. Sheidler of the 93rd Ohio recounts his intense experiences dodging Rebel bullets during the Union assault at the Battle of Pickett's Mills, also known as New Hope Church, on May 27, 1864. Pickett's Mills proved one of the hardest fought engagements of the Atlanta campaign, and one that didn't go well for the Union as is evidenced by the heavy casualty lists incurred during the assault on the Confederate lines that day. My wife's great-great-great grandfather was one of those wounded, so the story of this battle is of additional interest to me personally.  This battle has previously been discussed on this blog in "Inside the Crime of Pickett's Mills: Voices from the 49th Ohio" from last May which can be viewed here . Scheidler's story appeared in the March 17, 1898 issue of the National Tribune .
3 comments
Read more 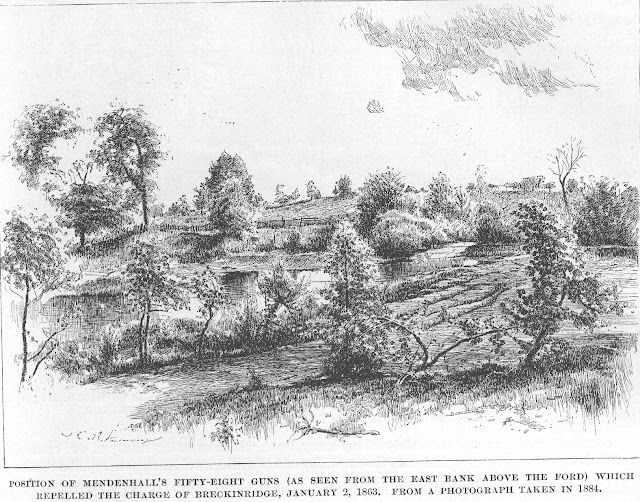 Thursday, January 1, 1863: New Year’s morning dawned clear, much brighter than our hopes. We took position much the same as on the preceding evening. A division of artillery, probably 36 pieces, stood masked in the bushes just to our left. Not much firing took place before we got into line. I soon saw the Rebel line emerge from the wood and try to cross that field and try to for the third time. It was the last. A chief of artillery standing near commanded fire. An almost instantaneous discharge followed and the shattered Rebel columns took refuge in the wood. Not much fighting occurred. In the afternoon, our division was ordered to the extreme right and the Rebels were appearing in force there. We marched back along the pike about a mile and formed but no attack came. We passed the night by the pike. It was intensely cold and having no blanket or overcoat I found it impossible to sleep. That night seemed to be one of unlimited length and of unequaled suffering to me. The bluf
Post a Comment
Read more

Among the somber cedars: Lancelot Scott at Stones River

Lancelot Scott enlisted as a private in Co. G of the 18 th Ohio Volunteer Infantry in 1861 and soon thereafter was promoted to the rank of sergeant. Scott kept a diary during his service which he expanded upon later in life. The following excerpt covers the period of December 28, 1862 through January 5, 1863, “the most momentous week of my life” Scott wrote. “The histories and stories of battles that I have read have been supplanted by actual facts and scenes and not all that I ever read can convey half the impression of reality. I hardly know how to write the history of the past week but shall try and relate my own experience.” Image of a Union encampment outside of Nashville, Tennessee in December 1862 by William Travis. Note the contraband cook at left stirring the soup while dressed in a blue forage cap and blue army trousers. While stationed at Nashville, Lancelot Scott had the opportunity to visit the theater in Nashville where he saw a play entitled "Hunchback"
2 comments
Read more 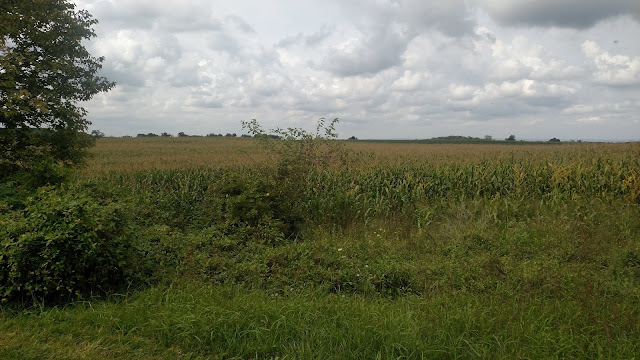 Through the courtesy of a family friend, I present an excerpt from the Civil War diary of Thomas Lyons McCarty that discusses his participation in Lee's Maryland Campaign and the Battle of Antietam. "T.L." as he was known served for nearly four years as a private in Co. L of the 1st Texas Infantry. The 1st Texas formed a part of the celebrated Texas Brigade of the Army of Northern Virginia, the brigade gaining much fame under its first commander John Bell Hood.  McCarty was born in 1838 in Houston, Texas and later was one of the founders of both Ennis, Texas and Oklahoma City, Oklahoma. His diaries cover his wartime service from May 1862 right until the surrender at Appomattox The complete diary and McCarty's papers reside at the University of Texas Austin. McCarty's diary picks up a few days before Antietam when the 1st Texas tried to reinforce positions on South Mountain on the evening of September 14, 1862... The Miller Cornfield at Antietam National Bat
1 comment
Read more

The "Horrors of Sixty-Two": Rowena Blankenship and New Year's Eve 1863 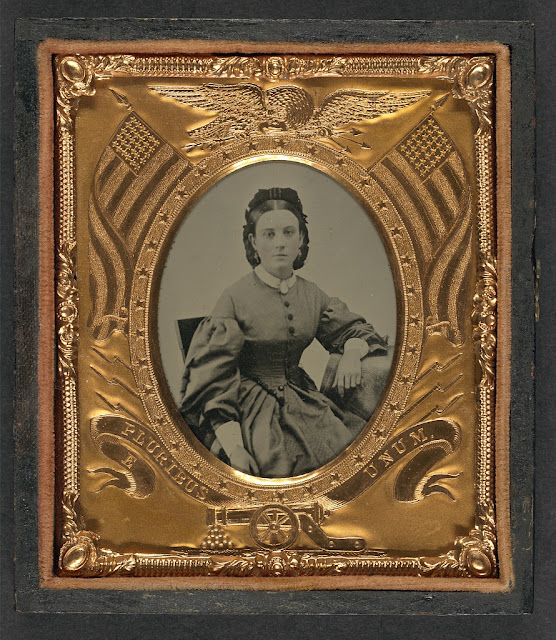 Rowena Alexis Blankenship was born in 1844 in the high hills of Gallia County in southeastern Ohio, growing up near the small village of Mercerville. As she watched her neighbors, family, and friends go off to war, Rowena crafted a number of poems to help lift the spirits of her community and to help others make sense of the tumultuous times. Her work survives through the pages of the Gallipolis Journal , and while her poetry will not give Walt Whitman any fears of losing his title as America’s premier Civil War-era poet, several of her pieces are very evocative of the times and provide a wonderful insight into how a young Ohio woman viewed the Civil War. A patriotic woman of the North who appears to be about the same age as Rowena Blankenship. The Civil War for the women of the home front was at times a gut-wrenching and life-changing experience. For Rowena, she found a release through her poetry. This incredible image is part of the Liljenquist Collection of the Library of Congr
Post a Comment
Read more 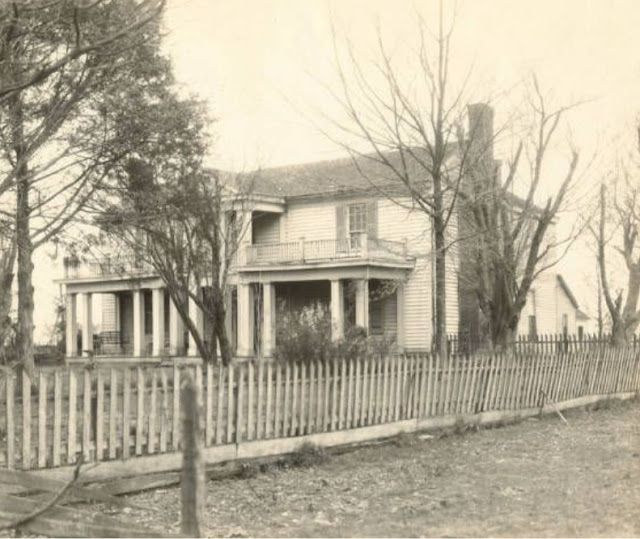 The Gresham House located along a single lane dirt road known as Gresham Lane became the one of the primary field hospitals for the right wing of the Union army during the Battle of Stones River. Casualties from the divisions of Richard H. Johnson, Jefferson C. Davis, and Philip Sheridan were brought back from the front lines and provided medical care in this house and the grounds surrounding it. Private Charles Barney Dennis of the 101 st Ohio described the hospital as “a large plantation house surrounded by groves of maple, hickory, oak, and black walnut.” [i] An existing photograph from 1928 shows the Gresham House to be a two-story Greek Revival plantation house featuring a nearly full length front porch, two-story high columns around the front door, and two second story porches and chimneys at the north and south ends of the house. Gresham House in Murfreesboro, Tennessee as seen in 1928. If these grounds and walls could speak, the stories that could be told: General Joshua
Post a Comment
Read more
More posts