Showing posts from April, 2022
Show all

We Glory in It: Outgunning the Rebs at Resaca 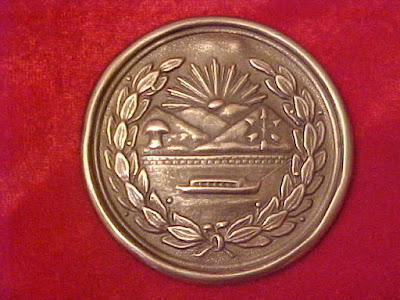 The pride in his regiment’s accomplishments at Resaca comes clearly through the pen of Captain Dennis H. Williams of the 43 rd Ohio. “In all these operations we are very well pleased with ourselves,” he wrote home shortly after the battle. “We are now resting for the first time since the 12 th , having been marching or fighting since that time without one entire night’s sleep or one full day’s rations. Still, we glory in it if we can but put down this unholy rebellion.”           The 43 rd Ohio, as part of Colonel John W. Sprague’s brigade of the Fourth Division of the 16 th Army Corps, fought on the far right of the Union army, not far from the Oostanaula River, and took part in the 15 th Corps attack on the evening of May 14 th that pushed General James Cantey’s division back to a second line of works closer to the town of Resaca. Williams was pretty touchy about that affair, noting that his brigade was brought up as support and ending up in the front line, charging ove
Post a Comment
Read more

A Galvanized Yankee Executed at Tullahoma 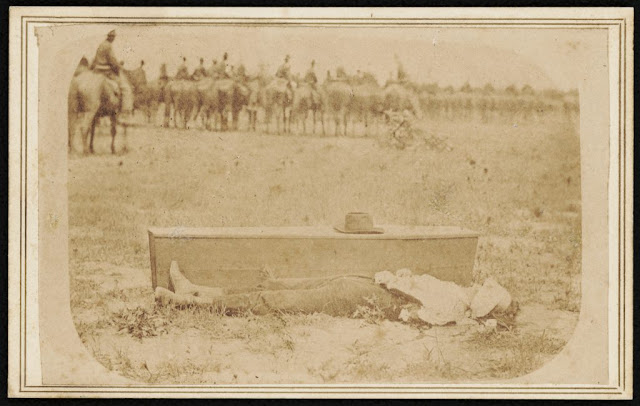 At 3 o’clock on the afternoon of Friday, January 30, 1863, twelve men from the 1 st Louisiana Regular Infantry executed William C. Ackerman in Tullahoma, Tennessee. The man had been captured in the opening moments of the Battle of Stones River nearly a month earlier wearing the blue uniform of a private soldier in the 32 nd Indiana Infantry. This constituted the crime that led to his execution: Ackerman had deserted from the ranks of the 1 st Louisiana while the regiment was in Kentucky during Bragg’s fall offensive and joined up with the Indiana regiment while it was refitting in Louisville.           Ackerman, a 24-year-old German native, had enlisted in Co. E of the 1 st Louisiana Regulars during the spring of 1861, among the hundreds of laborers from New Orleans who joined up in this regiment for three years’ service, unusual among early Confederate regiments. The 1 st Louisiana first saw service at Pensacola on the Florida coast, serving in Braxton Bragg’s command an
1 comment
Read more

A Bitter Pill on Kennesaw Mountain 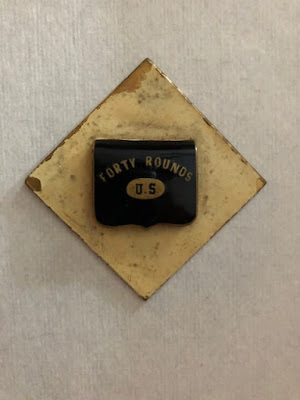 In regard to the assault on Kennesaw Mountain, the major thrust of Sherman’s attack was to be performed by the 14 th Army Corps at what became known as the Dead Angle, but the assault also took place on several other scattered parts of the line as well with fighting just as bitter if the losses were not as heavy. As remembered by Adjutant William Styles of the 111 th Illinois of Giles Smith’s brigade of the 15 th Army Corps, it quickly became evident to the troops that the position was simply too strong to be taken by frontal assault.           “Their entrenchments were very strong, and they extended from the top of a high rocky hill to and over a second and smaller hill, equally rough and broken. Minie balls were now flying thick and fast, but our men marched nobly forward to the works with a yell, such a yell as none but brave men know how to give. Charging up to within a short distance of the works, many falling to rise no more, we then lay down, protecting ourselves as
Post a Comment
Read more

Among Hovey’s Babies at Resaca

In late 1863, General Alvin P. Hovey, who had previously served with distinction as a division commander with Grant’s Army of the Tennessee during the Vicksburg campaign, returned home to Indiana upon the death of his wife Mary Ann who died at the age of 38. He arranged for guardianships for his two surviving children (the couple had lost three children in infancy) and while doing so worked as a liaison between Governor Morton and General Grant. Indiana was then in the midst of recruiting regiments for Grant’s army at Chattanooga and eventually this “Indiana Legion” would be given to General Hovey as a division. Organized into two brigades, the division included the 120 th , 123 rd , 124 th , 128 th , 129 th , and 130 th Indiana regiments along with the 23 rd and 24 th Indiana batteries. Much emphasis had been placed on recruiting young, unmarried men and the division was sometimes referred to as “Hovey’s Babies.” Assigned to the 23 rd Army Corps under General John Schof
Post a Comment
Read more

Vignettes of Sherman’s March to the Sea 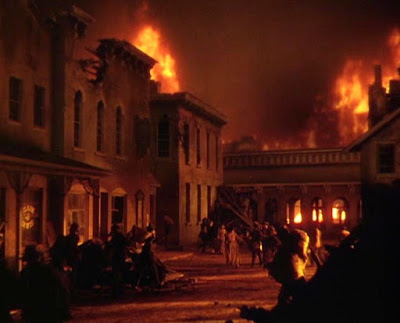 Captain Moses Osman of the 104 th Illinois kept a detailed daily journal documenting his regiment’s march through Georgia in November and December 1864. Upon his safe arrival in Savannah, he sent the journal back to his brother in Ottawa, Illinois who published the journal in four successive issues of the Ottawa Free Trader . This blog post features some of the highlights from those journal entries.   This dramatic shot from Gone With the Wind gives some indication of what Captain Osman witnessed during the burning of Atlanta in November 1864. "The black smoke as it reflected the light from above formed a crimson canopy above us and gave a beautiful pink tint to the country around," he noted in his journal. "But gorgeous as the spectacle was to the eye, it filled me with gloom." Burning of Atlanta- November 15, 1864           “We encamped for the night on a height on the east of the city adjoining the Augusta Railroad affording a fine view of the city
Post a Comment
Read more

Rosy's Heavy Metal: Artillery of the Army of the Cumberland 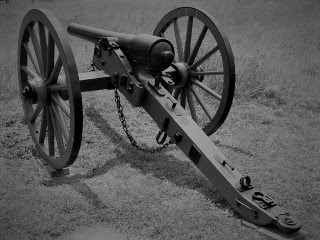 The grim cast iron 10-lb Parrott rifle was the most common artillery piece employed by the Army of the Cumberland at the Battle of Stones River. A total of 36 of these West Point Foundry-produced weapons served in various Federal batteries.  Napoleon once said that “God fights on the side with the best artillery” and if there was one area where the Army of the Cumberland enjoyed a clear superiority over the Confederate Army of Tennessee, it was in the size, organization, and striking power of its artillery arm. Colonel James Barnett served as the army’s chief of artillery and during the Stones River campaign would have under his nominal command 27 batteries totaling 139 guns; the batteries were commanded by 86 officers and served by 2,760 men. (Another dozen batteries were in the army but not at the battle.) Most of the batteries were attached to individual infantry brigades and under direct control of the brigade commander, but in Crittenden’s left wing, the artillery batteries as
Post a Comment
Read more

Licked Up By Fire: Marching through Georgia with General Fuller 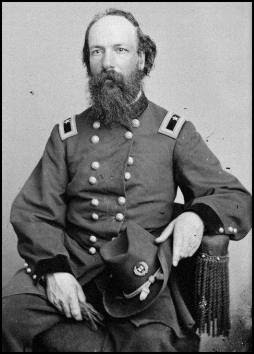 Brigadier General John Wallace Fuller was intimately familiar with the power of fire to change a life.           Writing to an old neighbor in Toledo, Fuller wrote “it would have amused you to see the manner in which the public buildings were destroyed in the “Gate City.” The depot, for instance, a fine brick structure, was brought down by the old Roman battering ram. A heavy rail of T-iron was the ram; it was suspended on wooden horses and swung like a pendulum (except that the rail was, of course, horizontal). The end of the rail speedily battered down the brick columns supporting the building and laid everything in ruins. What was not smashed in this way was soon licked up by fire.” The English-born brigadier, born in 1827 as the son of a Baptist minister, had emigrated to New York at six years of age and in his teen years worked an apprenticeship at a bookstore in Utica. Fuller so enjoyed the profession that he decided to make it his life’s work, becoming a partner in th
Post a Comment
Read more

One of the "Crazy Delawares" Captured at Chancellorsville 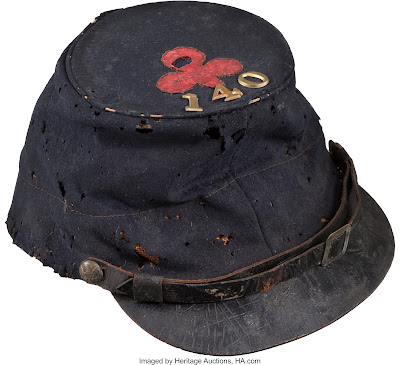 The 2 nd Delaware Volunteers, the first three-years regiment raised in the state, was not solely a Delaware affair: three of its companies (B, D, and G) had been raised among the German population of Philadelphia while Co. C had been raised in Elkton, Maryland. The balance of the companies was raised around Wilmington, Delaware, with a large and vocal Irish contingent among the volunteers. The regimental flag carried the regimental nickname of “The Crazy Delawares,” a name given them by their brigade comrades for their reckless bravery at the Battle of Antietam.           Serving among the “crazy Delawares” was Adjutant Charles J. Smith (also spelled as Smyth) who enlisted with the Elkton company as a lieutenant in 1861 and by the spring of 1863 had been appointed as adjutant of the regiment. On May 3 rd , 1863, he was ordered to lead a detachment of 75 men to the skirmish line where the confusion of combat among the dense growth of the Wilderness led to roughly half the men,
Post a Comment
Read more

Facing the Iron Hail: The 74th Ohio at Stones River 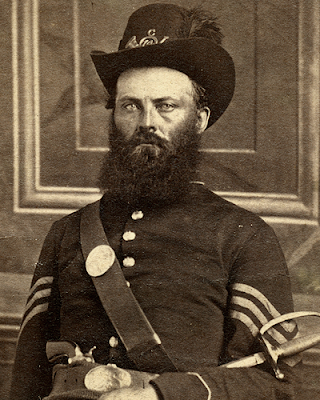 "Fight for your country and your God-aim low!"  Sergeant John William Baldwin of Co. C of the 74th Ohio poses in this 1862 image taken in Nashville, Tennessee in his Hardee hat cradling his non-commissioned officer's sword, a revolver tucked into his belt. The Hardee hat is complete with an ostrich plume and full hat brass indicating his branch of service (infantry), regimental number, and company. The 74th Ohio went into action on December 31st 1862 with 18 officers and 381 enlisted men in the ranks and lost 12 men killed, 71 wounded, and 85 missing. Co. C was led by Second Lieutenant Robert Stevenson during the Battle of Stones River and suffered 10 men wounded, two of them mortally. Baldwin would be commissioned a second lieutenant on March 19, 1864 but would decline promotion to first lieutenant in October, turning in his resignation on November 5, 1864. He lived until 1896 and is buried at Woodland Cemetery in Xenia, Ohio.      In the aftermath of the Battle of Sto
Post a Comment
Read more

Struck down at Cold Harbor: In Action with the 8th New York Heavy Artillery 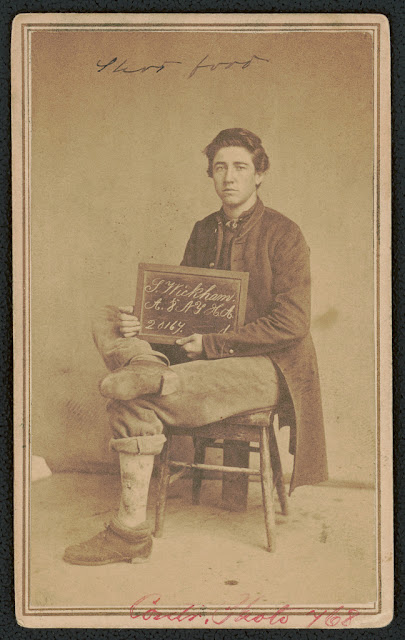 By the spring of 1864, the 8 th New York Heavy Artillery had thus far had a quiet war. Recruited as the 129 th New York Infantry in the summer of 1862 from Niagara and Orleans Counties in western New York, the regiment had been converted into heavy artillerists and served for much of the past two years in the forts guarding Baltimore harbor.           But in mid-May as Grant’s Overland campaign ground on towards Richmond, the decision was made to pull the veteran heavy artillery troops out of their forts and send them to Grant’s army where they would be converted into infantrymen. On the afternoon of May 15, 1864, the raw Federalized National Guard troops of the 144 th Ohio marched into Fort McHenry with orders to relieve the 8 th New York then led by Colonel Peter Porter. Adjutant Jonathan Ayres of the 144 th noted the departure of the 8th New York in a letter back home. “The 8 th New York Heavy Artillery left for the front via Washington,” he wrote on May 16 th . “Th
Post a Comment
Read more
More posts