Showing posts from February, 2021
Show all

The Sorrows of an Ill-Spent Day: A Wolverine at Secessionville

The following letter was written by Captain George Proudfit of Co. K of the 8th Michigan Volunteer Infantry to his father John Proudfit in Stanley Corners, New York in the immediate aftermath of the Battle of Secessionville, South Carolina. This small battle took place on James Island south of Charleston, South Carolina on June 16, 1862 and was a disastrous affair for the 8th Michigan; as Captain Proudfit reports, the regiment went into action with 500 men and 22 officers and lost a total of 214, 46 of the men being killed in action and another dozen dying of wounds within days of this tragic if little-remembered engagement. The 8th Michigan won praise from its superiors for its bold bayonet charge upon the Confederate works, the regiment reserving its fire until they reached the parapet. The enemy fire was so heavy, however, that the only Wolverines to get into the works went in as prisoners. " We feel injured, for we feel that we were led up to the cannon's mouth to swal
1 comment
Read more

Talking Smack with the Johnnies at Vicksburg 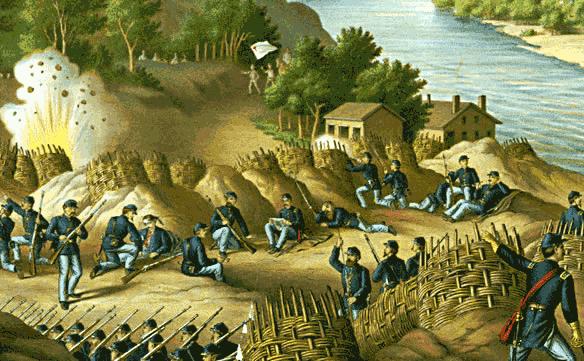 Following General U.S. Grant's two failed assaults on the Vicksburg defenses (May 19th and 22nd), the two armies settled into a siege. Grant's forces had General John Pemberton's army completely hemmed in on the landside while the brown water Navy patrolled the Mississippi River and made cross-river traffic a perilous affair. Within the first week, the armies both settled into a routine  and as often happened in the Civil War, informal lines of communication developed between the opposing soldiers.       "The lines were so close together at Vicksburg that the pickets on both sides were necessarily posted so near to each other that by mutual agreement, they did not fire but merely watched one another during the day," remembered Captain Charles Dana Miller of the 76th Ohio. "A great deal of conversation was carried on and often they would meet on the middle ground and exchange papers and trade tobacco and coffee," he wrote.     Early on the exchanges
Post a Comment
Read more

There Goes My Brigade to Hell: the 42nd Ohio at Chickasaw Bayou 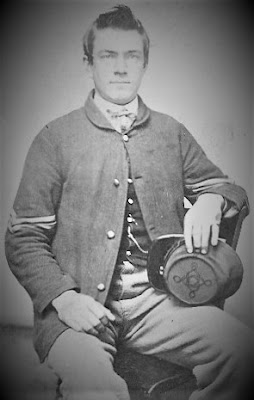 Even a century later, one can feel the emotion of William H.H. Monroe’s words as he described what he witnessed at Chickasaw Bayou in December 1862. “When we were about half way through the timber, the head of the column rose above the bank across the bayou and as they rushed forward, the roar of artillery was drowned by cheers that made the woods ring. That encouraged us to press forward with renewed vigor. Now came the hour of fearful trial and slaughter. Our men were in the field and under the converging fire of artillery and musketry. It seemed as though every man would fall before it, and that human courage must fail under those trying circumstances,” he wrote in 1899.   Monroe, a veteran of Co. A of the 42 nd Ohio Volunteer Infantry, crafted a three-part series about the Battle of Chickasaw Bayou entitled “Battle in the Bayous” that was published in three subsequent October issues of the National Tribune . Monroe’s account specifically examined the assault made by his regiment
Post a Comment
Read more 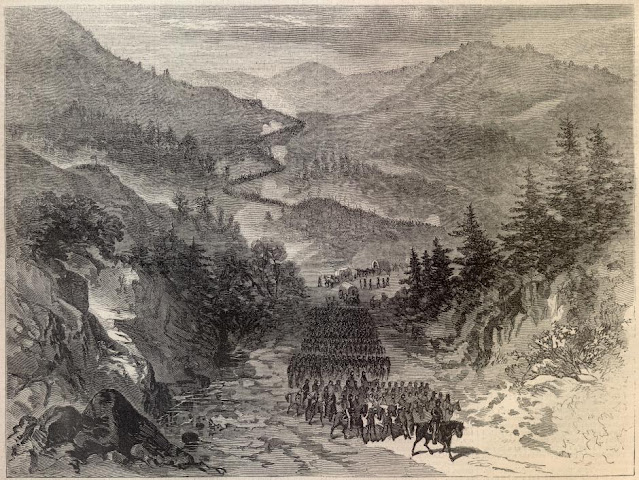 In June 1862, General George Morgan's division drove the Confederates from Cumberland Gap in southeastern Kentucky along the Appalachian Mountain Range. The historical importance of Cumberland Gap to the settlement of Kentucky cannot be overestimated, but its strategic value in the Civil War derived the fact that at the Gap, the Wilderness Road had been built connecting southwestern Virginia with the Kentucky Blue Grass. Federal control of Cumberland Gap would prevent Confederate reinforcements or incursions into eastern Kentucky from either southwestern Virginia or eastern Tennessee along the Wilderness Road. Federal troops marching through Cumberland Gap during the Civil War      But just a few months later, Morgan's division, threatened with capture as a result of Union reverses in the opening weeks of the Kentucky campaign, had to abandon Cumberland Gap without a fight. The division made a 16-day trek through the mountains of eastern Kentucky to safety at Greenup on th
Post a Comment
Read more 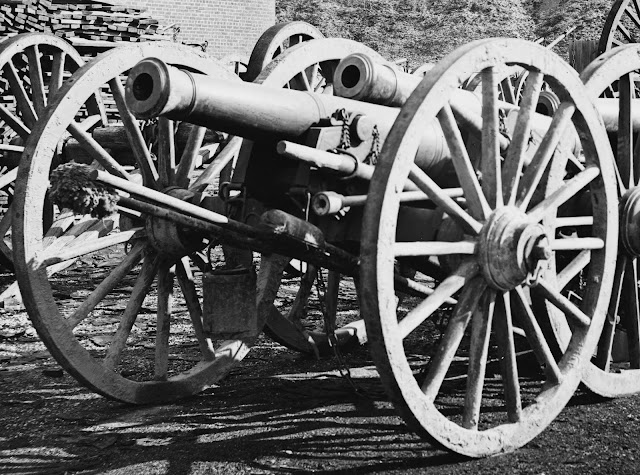 The little-remembered Battle of Ivy Mountain, Kentucky was known by several alternate names including the Battle of Dry Mountain. the Battle of Dry Creek, or the Battle of Piketon/Piketown/Pikeville. This small scale engagement was one of the earliest engagements in the Western Theater and pitted about 250 poorly-armed recruits of the 5th Kentucky (Confederate) Infantry against roughly 3,600 Federal troops led by bombastic Brigadier General William "Bull" Nelson. Located near present-day Ivel, Kentucky, the battle was fought along the state-owned river road which is today U.S. 23. A historic marker alongside the road commemorates the battle.     Fought on November 8, 1861 (one day after the Battle of Belmont several hundred miles to the west), the engagement began when the advance guard of Nelson's column unknowingly marched into an ambush set by Colonel John S. "Cerro Gordo" Williams' men at a bend of the river road near the confluence of Ivy Creek and t
1 comment
Read more 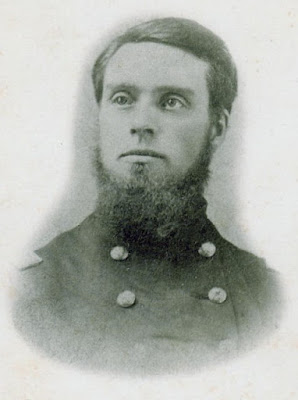 Mere days after the Battle of Chickamauga, Colonel John T. Wilder, commander of the famed Lightning Brigade, a unit of Spencer repeating rifle-armed mounted infantry which played an important role in the Chickamauga campaign, returned home to Indiana to "recruit his health and strength from a prostrating illness which would have sent him to the rear long ago if the prospect of a battle had not been stronger than the disease and kept him up."  Passing through the city of Indianapolis on his way home to Greensburg, the 33 year old New York native sat down with a reporter from the Indianapolis Journal and gave his perspective of the recently completed campaign. Interestingly, he seemed more irked at the inaccurate reporting of the New York Herald than any other aspect of the battle.  Colonel John Thomas Wilder (1830-1917) of the 17th Indiana Mounted Infantry commanded the famed Wilder's Lightning Brigade during the Tullahoma and Chickamauga campaigns. The Hoosier move
Post a Comment
Read more

Surrounded by a Wall of Fire: With Sheridan’s Division at Stones River 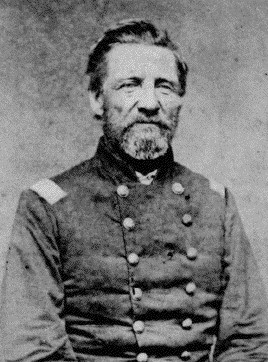 Two days before Christmas 1862, Co. E of the 22 nd Illinois was on picket duty south of Nashville when a regiment of Confederate cavalry rushed one of the posts and captured 13 soldiers. “General Sheridan came up and damned us off and called us cowardly sons of bitches,” recalled Corporal William Austin of Co. A. But a week later on the cusp of the battle of Stones River, the hot-headed Ohio brigadier sent a dispatch to Lieutenant Colonel Francis Swanwick commanding the 22 nd Illinois. It was an apology to be read to the men of the regiment. “He stated he was very sorry for what he said in the heat of anger against a very gallant regiment but wished the matter to be forever at rest,” Austin commented. Within moments, the 22 nd Illinois and the three other regiments of Colonel George Roberts’ brigade would put in the fight of their lives holding the left flank of Sheridan’s division line south of the Wilkinson Pike. The 22 nd would prove themselves to certainly be a very gallan
Post a Comment
Read more

A Bloody Half Hour: With Battery K at Gettysburg 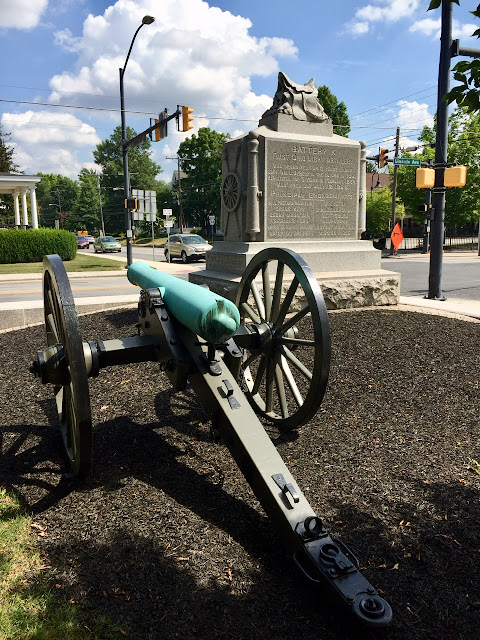 It was about 4 o’clock in the afternoon of July 1, 1863 when the 118 men of Battery K of the 1 st Ohio Volunteer Light Artillery went into action on the grounds of Pennsylvania College on the northern edge of Gettysburg. The Federal line in this sector held by the 11 th Corps had collapsed and as the blue coated infantry surged back towards town, Captain Lewis Heckman and his four-gun battery of 12-pdr cannon were tasked with covering the retreat. It was a desperate assignment, and for Battery K, a deadly one. In their bloodiest half hour of the war, the battery suffered 15 casualties, lost half its guns, had nine horses killed, and barely escaped being captured entire by the charging Confederates of Hays’ Louisiana brigade and Avery’s North Carolinians.       In that short half hour, the battery suffered the highest number of casualties of any of the four Ohio batteries engaged at Gettysburg, and was so beaten up by the experience that they were ordered to the rear and sat ou
Post a Comment
Read more

Gobbled Up on Streight's Raid 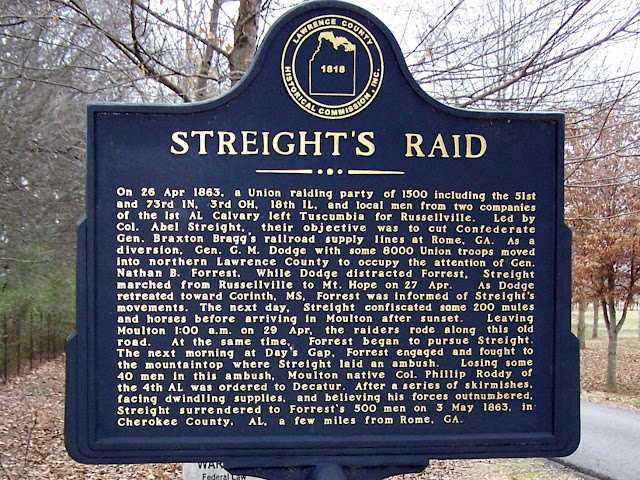 In April 1863, two separate but supporting cavalry raids departed from Union lines in Tennessee with the aim of raising havoc throughout the South. In western Tennessee, Colonel Benjamin Grierson led his troopers on a successful campaign through Mississippi and Louisiana before arriving back within Federal lines near Baton Rouge, Louisiana. Grierson's 600-mile raid was a success in that it diverted an entire division of Confederate troops away from the Vicksburg defenses at the time that General U.S. Grant was making his landing on the eastern bank of the Mississippi.     In central Tennessee, the Army of the Cumberland was not yet ready to embark on its campaign, but a hastily organized raid of mounted infantry set out on April 27, 1863 from Tuscumbia, Alabama tasked with cutting the Western & Atlantic Railroad between Atlanta and Chattanooga. This vital railroad had already been unsuccessfully raided once during Andrews' Raid in April 1862, but Colonel Abel D. Streigh
Post a Comment
Read more
More posts