Showing posts from September, 2022
Show all

With an Empire State Tenderfoot at Gettysburg 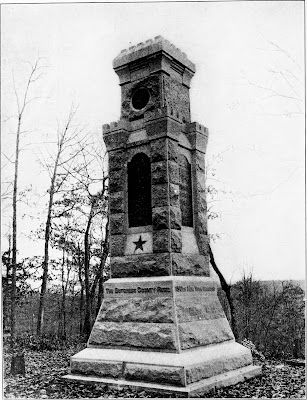 T he 150th New York had spent the first 10 months of its service on quiet guard duty in Baltimore, Maryland. The men, well-drilled but as yet unblooded, were pulled from the Baltimore defenses in June 1863 and assigned to General Henry Slocum's 12th Army Corps to take part in turning back Lee's invasion of Pennsylvania. Captain Joseph H. Cogswell of Co. A of the 150th was one of the "tenderfoots" who marched into Pennsylvania.     " Twas the longest march our feet had ever made at one pull, and many complained," Cogswell explained. "In the night we were greeted with a soaking rain, which was by no means welcome to those who neglected to put up their tents. The rain had not ceased at sunrise nor yet at 8 o'clock, our starting hour. The slight mud was better than dust; the rain slackened and visited us by showers through the day. We made a 17-mile march Friday, halting at "Popple Springs," towards night. Many a one sought the ambulance
Post a Comment
Read more

Dog-Trotting into Atlanta with the 150th New York 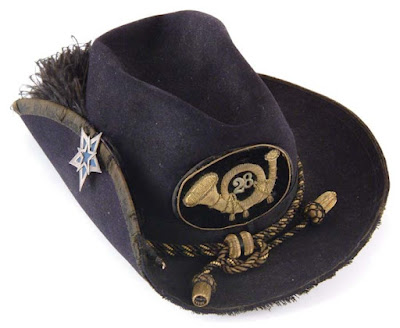 The joy is evident in the tone of Captain William R. Woodin's letter written after his 150th New York marched into the city of Atlanta in September 1864.      " The oriental afternoon dreams, the romantic twilight musings, and the fascinating piscatorial pursuits, in which the 150 th  were indulging by the waters of the low murmuring Chattahoochee, were slightly interfered with yesterday, as the brigade had marching orders at 3 o'clock; and, in half an hour afterwards, the 3 rd  Wisconsin and the 150 th  N. Y. were approaching the defenses of Atlanta on a gentle dog-trot, "terrible as an army with banners," but as jolly as so many festive aldermen starting for a Long Island clam bake," he wrote. " We went, drums beating, colors flying, and the brigade band playing the Yankee Doodle, until the place was completely filled with Yankee Doodle, Star-Spangled Banner, Hail Columbia, and Abraham Lincoln! Taking possession in the name of the great flanker
Post a Comment
Read more

I Miss My Chum: Losing Major Edwards of the 19th Ohio at Shiloh

September 23, 2022
It was in the damp early morning hours of Monday April 7, 1862, at Pittsburg Landing, Tennessee that Captain Oscar O. Miller of the 19 th Ohio stood under a tree trying to keep out of the rain. Standing beside him was Major Timothy Dwight Edwards, Miller’s best friend in the army. The two men discussed “the chances and probabilities of the succeeding day. Both agreed that victory must be ours as the enemy had attacked us on Sunday though we might one or both be laid low as part of the price,” Miller remembered. The following morning, the 19 th Ohio marched on to the battlefield and came under a heavy fire from Rebel batteries. From his place in the ranks, Captain Miller was horrified to see Major Edwards struck by a 6-lb cannon ball as he rode along on his horse behind the regiment, killing him instantly. “You can scarcely imagine how I felt when I knew he was really dead,” Miller stated. “But I had a heavy responsibility resting on my shoulders yet and I had no time to thin
Post a Comment
Read more

All the Demonism of a Battle: A New Yorker at Third Winchester 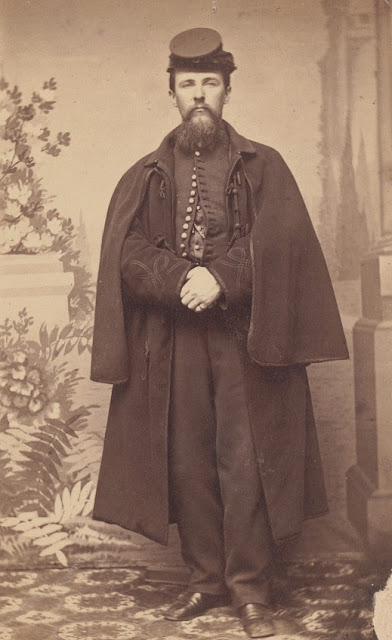 In the bloodiest engagement of the 1864 Valley Campaign, the 114th New York took the sad honors of losing more men than any other regiment engaged at the Battle of Opequon/Third Winchester. "A ragged sleeve, a twinge of the arm, and the remonstrances of the Doctor remind me that I am not entirely whole from the fight," one captain noted.        Captain James Franklin Fitts commanding Co. F of the 114th New York, numbered amongst those wounded survivors of the fighting of September 19, 1864. He recalled the battle itself as an impressive sight, if frighteningly dangerous.       " But the sight that met our eyes barely 200 yards across that clearing—who that was there can ever forget it? Three Rebel battle flags were tossed defiantly in the air from a line-of-battle apparently four times the length of our own, while the smoke of an incessant discharge of musketry and artillery welled away from the field. Two hundred yards is a small measure of ground, but when it is co
Post a Comment
Read more

Cold Steel Did Great Execution: With the 23rd Ohio at Fox’s Gap 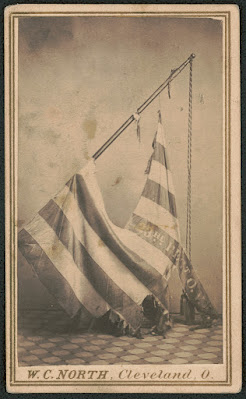 The 23 rd Ohio Volunteer Infantry as part of the Kanawha Division had until August 1862 spent its Civil War service fighting the Confederacy in the rugged mountains of western Virginia. It first saw action at Carnifex Ferry, then Cotton Mountain, Giles Courthouse, Flat Top Mountain, and Pack’s Ferry. The battle-hardened Kanawha Division arrived in the defenses of Washington shortly before Second Bull Run and in McClellan’s subsequent reorganization of the army found themselves attached at Major General Ambrose E. Burnside’s 9 th Army Corps. Within days, the Ohioans would find themselves in the vanguard of the Army of the Potomac chasing after Robert E. Lee’s army in the opening stages of the Maryland Campaign. They would clash at Fox’s Gap as part of what was known as the Battle of South Mountain on Sunday, September 14, 1862. The following letter was written by an unknown soldier of Co. E of the 23 rd Ohio writing under the name of “Philo.” He provides a detailed account o
Post a Comment
Read more

With the Havelock Battery at Gettysburg 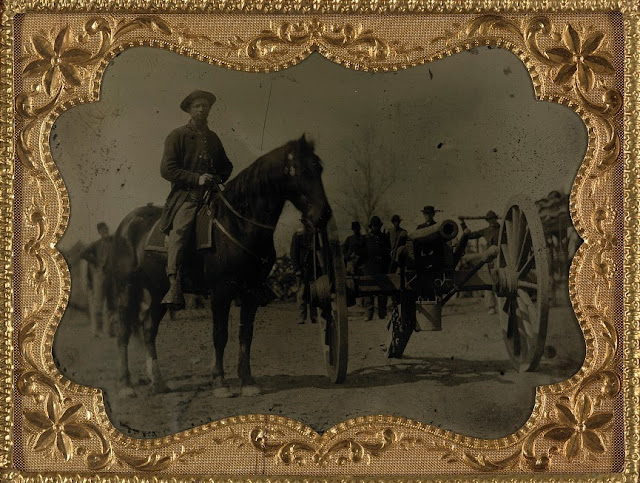 Second Lieutenant Wadmore Redhead of the 11 th New York Battery participated in the repulse of Pickett’s charge on the afternoon of July 3 rd little expecting that the Confederate assault would target his battery also. The battery had been brought into line in the midst of E. Porter Alexander’s massive cannonade that afternoon as replacements for Union batteries that had been disabled. “When our battery was taken to the front, shot and shell were flying and exploding all around us and the line on the right was wavering. It was no small matter to come into action under such a terrific fire, but neither officers nor men faltered. We had not been in position ten minutes before four horses on the guns and four men on the caissons were wounded,” he stated. But when he saw the line of gray approaching his battery’s position, the former Englishman girded himself for a continuation of the struggle. “This time, however, it was our own battery and the two on the left of us that they i
Post a Comment
Read more

The Gods Are Smiling on Us: The Surrender of Vicksburg 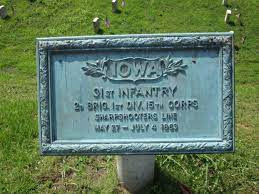 Marching to Vicksburg with the 31st Iowa 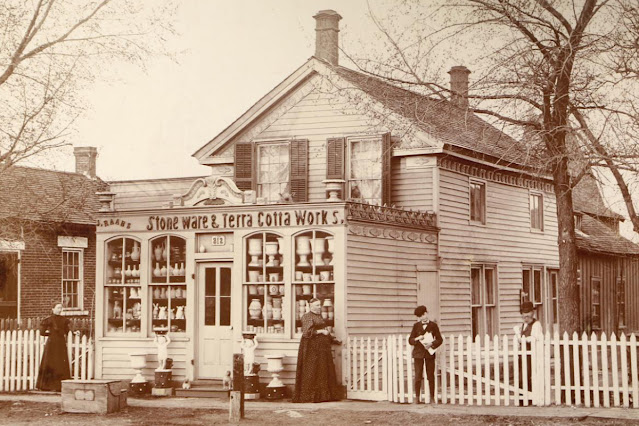 A Roundtrip Ticket to Andersonville 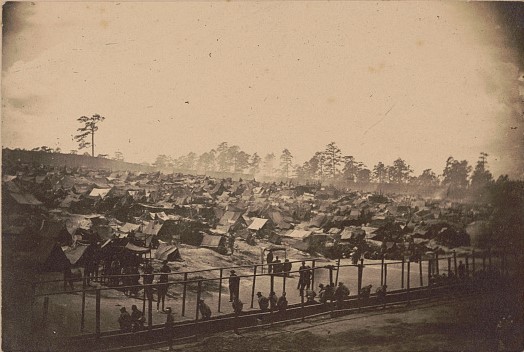 On July 22, 1864, the 3 rd Iowa Infantry found themselves nearly surrounded by Confederate troops from General Patrick’s Cleburne’s division in the opening thrusts of the Battle of Atlanta. The Iowans had been ordered up that morning as part of Colonel Benjamin Potts’ brigade of General Giles Smith’s Fourth Division of the 17 th Corps. “We had hardly got started before the bullets came whizzing around us, but we continued to advance until we found that the Rebels had got in our rear and all around us,” Private James Maggart recalled. “Our colors were taken along with 111 men, the color bearer being shot in seven places and the captain commanding the regiment was killed. The boys retreated back to their rifle pits, some in one regiment, some in another. We number about 60 men.”           Among the men captured that morning was Corporal Daniel M. Mabie of Co. K. Mabie, a frequent correspondent of the Cedar Falls Gazette , arrived at Andersonville a week after his capture and k
Post a Comment
Read more

Old Abe: The Magnificent War Eagle of the 8th Wisconsin 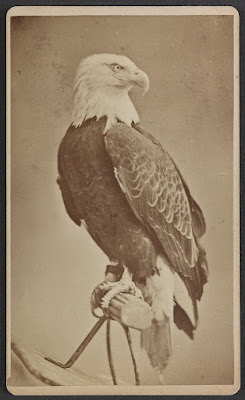 In September of 1861, Captain John E. Perkins and the Eau Claire Badgers went into Camp Randall, in Madison Wisconsin with an unusual company mascot: a fledging bald eagle who they soon named Old Abe.           Old Abe had been captured near the Flambeau River in Chippewa County, Wisconsin by Agemahmegezhig (Chief Sky), a member of the Chippewa tribe during sugar season in the spring of 1861.   “His captor cut down a large pine tree in which was the eagle’s nest and secured this one caught in spite of the screams and menaces of the parent birds,” Captain James H. Green of the 8 th Wisconsin later wrote. Daniel McCann of Eagle Point, Wisconsin soon purchased this fledgling eagle by trading a bushel of corn with the Chippewa. Captain Perkins was then in Eau Claire organizing a company and it was there that McCann sold the eagle to Perkins’ company for $2.50. Perkins, who was later killed at the battle of Farmington, may have viewed the eagle simply as a recruiting gimmick, but
Post a Comment
Read more

Grass Before the Mower: A New York Officer in the Midst of Chancellorsville

It was all about confidence.       Captain John J. Lamon of the 107 th New York, writing a letter to a friend back in Iowa in the early morning hours of Saturday May 2, 1863, felt sure that with Joe Hooker in the lead, the Army of the Potomac would “destroy the Rebel army in Virginia or kill every man in our army. Fighting Joe Hooker is the man. He recognizes no flags of truce to bury the dead under which the Rebels have twice got away from us. We have not a slow and easy McClellan to command now but a regular fighting old war horse,” he wrote.           One of the factors that makes Captain Lamon’s letter special is when it was written: on Saturday morning before Jackson’s flank attack on the 11 th Army Corps that turned the tide of battle. His account provides insight into the feelings of a Federal officer on the cusp of Chancellorsville and is a concrete illustration of the remarkable work that General Hooker performed during the winter and early spring of 1863 to resto
Post a Comment
Read more
More posts