All six guns of Edgarton's Ohio battery (Battery E, 1st Ohio Light Artillery) were captured in the opening moments of the Battle of Stones River on December 31, 1862. While nestled in between the veteran troops of General Edward N. Kirk's and General August Willich's brigades, the battery was not in a good defensive position with only two guns stationed along the Franklin Pike facing south, while the four remaining guns were in park along Gresham Lane to the north.

It was a commonly held belief among the soldiers of the Army of the Cumberland (at least right after the battle) that the loss of this battery was due to the negligence of the battery commander (Captain Warren Parker Edgarton) because he sent off his battery horses to water at a nearby stream just before the Confederate attack. Divisional commander Richard Johnson also came in for a torrent of criticism and based on what veterans from Battery E report below, blame probably more rightly rests with Johnson's faulty positioning of his divisional artillery than on whether Edgarton sent his horses to water at 6:15 instead of 6:30 in the morning. Captain Edgarton and nearly a quarter of the men of the battery were captured along with all six guns that morning, and it was nearly six months before Edgarton was able to clear his name, and that of his battery.

Taking a slightly different approach from my usual posts which feature the account of a single individual during a battle, I've decided to string various accounts from battery members into a narrative in hopes of presenting a fair picture of the events of December 30-31, 1862.

Captain Warren P. Edgarton: After engaging in artillery exchanges with the Confederates throughout the afternoon of December 30, Edgarton reported to his brigade commander for orders. “I represented to General Kirk that my men were very weary, my horses almost famished, and my ammunition was short in the limber chests of the pieces and asked permission to withdraw long enough to prepare for the hard work on the following day. General Kirk pointed out a spot about 100 yards in the rear of the position I then occupied, sheltered by a heavy growth of timber, and ordered to bivouac there for the night. I reported to him that I could not place my guns into battery there or defend myself if assaulted. He replied that I should be protected and that ample notice should be given when I was expected to take a position in the line of battle. After I had brought my guns into park, the right of the brigade was thrown across the muzzles in front. General Willich’s brigade marched up and formed on the flank. I found myself within the angle formed by the junction of two brigades, retiring about 50 yards to a low and narrow piece of ground.”
Private George H. Stacey: “General Johnson gave orders for us to hold our ground right there and camp for the night. Captain Edgarton stepped up to him and said, “General, I believe we will be attacked tonight. You had better let me come up to action front and load with double charges of canister so that if we should be attacked, we shall be ready to meet them.” Johnson replied “Never mind, you won’t be attacked.”

Private William H. Laughlin: “Our captain seeing that we were in a very unfavorable position to meet an attack and feeling sure that the Rebs were preparing for such an attack went to General Johnson and as ranking captain (and chief of artillery) requested the privilege of moving our three divisional batteries back on to the brow of a hill some 40 to 50 rods back of the piece of woods we were then in, with an open cornfield in front of us. His plan was to put the batteries in line and double charge them with canister and wait for the morning. The Rebs would need to cross this open field in getting to us and he argued we could make their reception uncomfortably warm for them. The general told him to go back to his command saying “I guess I know my business.” Captain Edgarton came back in a rage and we stayed.”
First Lieutenant Albert G. Ransom: “Knowing our danger on the right, we planted two pieces on the road by which it was supposed the enemy would come, kept the horses harnessed all night, and took every precaution we thought necessary to guard against surprise.”

Captain Warren P. Edgarton: “At daylight, a small stream was discovered about 100 rods in our rear. It was all quiet along our lines. I could not hear a picket shot, nor any indication that the enemy was in our vicinity. I had no orders to take position. My horses were already harnessed to hitch on at a moment’s warning. I was completely surrounded by veteran troops. I had a right to suppose that our front and flank were so picketed that I should have notice of the approach of the enemy. I ordered a half battery of my horses to go to water at a sharp trot and return at the slightest indication of danger. The horses had barely reached the water when a fierce shout was heard at the front and a terrible volley of musketry was poured in on us. I called the cannoneers to their posts, had half a battery hitched in, put my guns into battery where they were, and in a moment was prepared to fight in that position.” 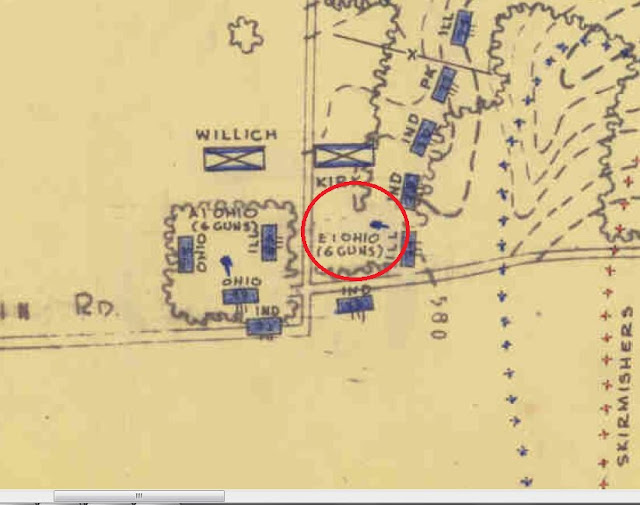 Second Lieutenant Henry A. Vincent: “It having cleared up during the afternoon, the night was very windy and bitter cold. So near the enemy no fires were allowed to be built and as our wagons containing our rations dare not come up, we were obliged from necessity to be tired and weary from the day’s exertions and go supperless to bed.”

Private William H. Carman: “At daybreak, there was a little firing on our left. Some of our men had gone to water their horses, some had gone to get water for breakfast, some had not got up yet. The man that sleeps with me had just got up and told me to get up when a lieutenant colonel rode through the camp and told Captain Edgarton that the Rebels were coming about 100 rods from us on the double quick.”

Private William H. Laughlin: “A man came dashing into our camp on horseback crying ‘For God’s sake, get out of this. They are right on us!’ He had no more than spoken the words when there was a blaze of musketry in our front and balls began to buzz around our ears. Confusion reigned at once. Officers were calling wildly for our men to fall in. Captain Edgarton called out for us to unlimber to the front and commenced firing.”

Private George H. Stacey: “In the morning, all of our men were lying on the ground when all at once a shower of bullets and shells came into camp. Our men jumped up and rushed to their guns, but to no purpose. By the time we got our guns into action, the Rebels came up on a charge. We opened on them with canister. They charged us four times and our men met them every time, but they were too strong for us and before we could get our horses on the guns, they commenced shooting our men. The howitzer I belonged to had all the men shot down except myself, and my coat collar was cut off and my pantaloons cut all to pieces. I was shot in the hand and the leg but not very bad.” 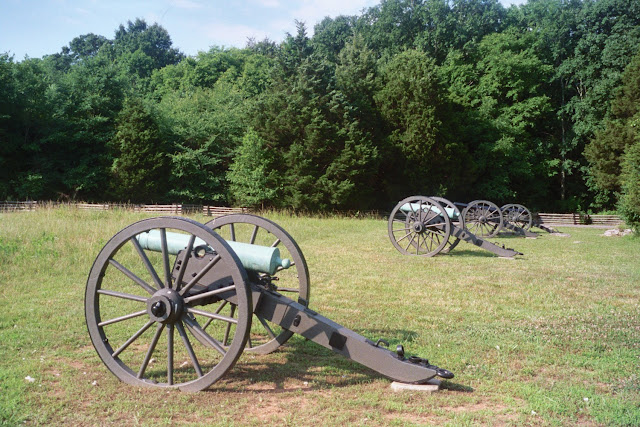 First Lieutenant Albert G. Ransom: “At daylight, the pickets gave the alarm and skirmishers were firing but as yet we could see no enemy. The horses were quickly hitched except perhaps one-half which were on their return from water and were brought up at once. Failing to distinguish the enemy, two shells were thrown in the direction of their fire and when they appeared, we fired canister. Six rounds were poured into the moving mass with great effect, but attacked in front and flank, we soon saw our horses shot down until the whole column was upon us. We had not horses enough to save our guns. Captain Edgarton’s manly voice rang out above the din of musketry, encouraging his men and giving orders coolly and judiciously. He preferred to go a prisoner with his battery rather than leave his much-cherished pieces.”

Private William H. Laughlin: “We ran our guns forward by hand. We loaded and fired as rapidly as possible. Some of our first shots knocked down the guns of our infantry which were still in stack. It seemed to me as I worked the gun that the Rebel balls were trying to play the long roll on our gun as they sprinkled against the sides so rapidly.”

Second Lieutenant Henry A. Vincent: “Our battery was fairly exposed to the assaults of the foe. In a few moments they had shot dead many of our men and horses and when we fired our cannon into their faces and all was no use, our noble captain gave the word: ‘Save yourselves boys if you can!’ Everyone began to look out for himself and started on a dead run to get out of the way. The bullets came among them like a storm of hail chattering among the dry leaves and rattling against the trees like a shower of stones.”
Private William H. Laughlin: “Our infantry were running past us to the rear. Men were being piled up on every side and it seemed as if no man could stand an instant in such a storm and live. Jude Waite, who was No. 2 just in front of me, sank down and I knew he was shot, but the gun was charged and ready for firing and it was my duty to fire it, so I stepped inside the wheel to insert my friction primer. As I stepped outside the wheel and pulled my lanyard, I saw our men runs towards the rear. I looked around hardly realizing I was alone with three divisions of Rebs to fight. After weighing the matter, I concluded my forces were hardly sufficient to compete and I decided therefore to withdraw my troops at once.”

Private William H. Carman: “They came up eight ranks deep and commenced firing. The front rank fired then fell and the next ranks kept doing so until they got within five rods of our pieces then they charged and took them. Two regiments came to our assistance, but they were cut down like grass.”

Captain Warren P. Edgarton: “The infantry gave way on the front and flank in disorder, almost with the first volley. I then opened on the enemy with canister, firing 16 to 20 rounds with good effect. The assault of the enemy was fierce and overwhelming. After the first fire, the enemy charged with an impetuosity which carried everything before him. The battery was taken. It would have been impossible for me to have saved my battery even had I commenced to retreat on the first alarm. The enemy was very near us before discovered, and the fight commenced without any of the preliminary skirmishing before a general engagement. To the best of my judgement, it was not more than five minutes from the firing of the first shot to when my battery was taken and myself a prisoner. I deemed it my duty to stay with the guns so long as a single shot could be fired or a chance exist of their being supported and retaken. I did not realize the helplessness of the case until I was surrounded and retreat impossible. I lost my guns, but I took the enemy’s receipt in full in red ink.” 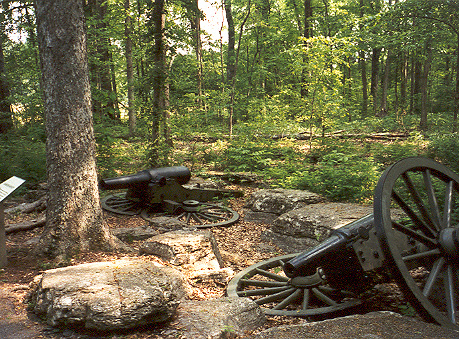