Despite being in intense pain from his own wounds, Captain Jules J. Montagnier of the 6th Ohio performed the melancholy task that fell to company commanders during the Civil War of notifying the next of kin of the death of one of the men under his command.

Montagnier, born in Cincinnati in 1835 to a French veteran of Napoleon’s army, had been educated at St. Xavier’s College in Cincinnati then went into the newspaper trade, working as a typographer for the Cincinnati Enquirer and later editing the largest circulating Know-Nothing organ of southern Indiana. The outbreak of the war found him back in Cincinnati as a member of the old Guthrie Gray Battalion, and Montagnier was among the first to respond to Lincoln’s call for 75,000 volunteers to suppress the rebellion.

Montagnier, commissioned a second lieutenant in Co. G, would progressively rise to the rank of captain and saw action with the 6th Ohio throughout the western theater, including Shiloh, Stones River, and finally at Chickamauga where he sustained two severe leg wounds on September 19th that led to his discharge from the army, and ultimately contributed to his death in 1872 at the age of 36. Initially sent home to Cincinnati to recover, Montagnier’s health was broken by his wounds that he could only briefly return to his prewar life in the newspaper business and spent the last three years of his life as an invalid.

“All through the war, he was a brave soldier and through all the hard service that fell to the lot of that regiment to be engaged in, Captain Montagnier had his full share; but his whole heart was in the cause and he never faltered and he was known and respected in the regiment as one of the truest and bravest men in it,” his obituary from the Society of the Army of the Cumberland read.

Montagnier’s letter, one of four that he wrote to families of his deceased men after Chickamauga, was written October 10, 1863 while he was convalescing in Cincinnati. It was written to Colonel R.R. Allen of Hillsboro, Ohio to inform him that Allen’s son Richard numbered among the slain at Chickamauga. Due to his own wound, “I am consequently unable to give you any of the particulars of his demise. But from the information I have received from the regiment in regard to it, his death must have been almost instantaneous. The circumstances were such as not to permit his remains being interred by his comrades,” Montagnier wrote. Private Richard R. Allen remains in an unknown grave.

Montagnier’s letter originally appeared in the October 15, 1863, edition of the Highland Weekly News.

The melancholy task falls to my lot of apprising you officially of the death of your son Richard R. Allen from wounds received in the Battle of Chickamauga on September 19, 1863. I was myself severely wounded before your son received the fatal bullet that terminated his life and am consequently unable to give you any of the particulars of his demise. But from the information I have received from the regiment in regard to it, his death must have been almost instantaneous. The circumstances were such as not to permit his remains being interred by his comrades, but such effects as were on his person were taken charge of by First Sergeant George B. Young of my company who will forward them to you at the earliest possible moment.

On communicating this mournful intelligence to you, permit me to tender to you the sincere condolence and sympathy of a fellow soldier. As your son’s commanding officer, I can assure you that his conduct was such as to entitle him to my respect. During the time he was under my control, I never had occasion to reprimand him for any dereliction of duty. On the contrary, his soldierly bearing and neat and clean appearance frequently caused me to commend and encourage him. He was in short, a fair type of true American soldier: intelligent and obedient, prompt to perform what was required of him, and possessed of that chivalrous courage which is destined to render our arms invincible.

The last time that my attention was particularly attracted to your son was on the field of battle. He was voluntarily engaged in an errand of mercy at the peril of his own life- withdrawing a comrade (then supposed to be wounded but whose soul was then in another world) from the fire of the enemy. This incident, illustrative of his noble character, excited the admiration of those who beheld it.

Trusting that you may bring to bear upon your affliction that resignation to the Divine Will which is the surest consolation in the hour of trouble, I beg leave to subscribe myself yours with sincere sympathy,

Bullets for the Union: Manufacturing Small Arms Ammunition During the Civil War 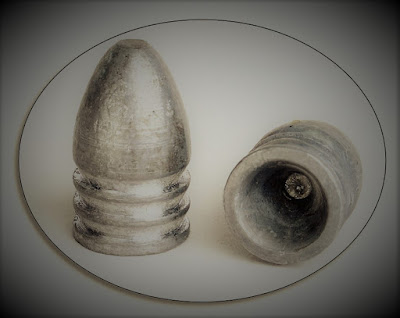 Civil War bullets are perhaps the most common item collected from the era; the two armies expended bullets by the millions during the four years’ conflict and spent or deformed bullets of all shapes and sizes have made fascinating and affordable collectibles since the guns went silent in 1865.       I recently acquired a display piece featuring 35 different types of small arms ammunition used during the Civil War, including everything from a small .28 caliber ball up to a .69 caliber three-ring Minie and it triggered some questions: how did the Federal army obtain its small arms ammunition during the war? Where did the lead come from to make the bullets, and where and how was the ammunition manufactured? This post seeks to answer those questions. A typical .58 caliber 3-ring Minie bullet   “Whenever the blasts of war blow in the ears of men who trade in the implements of destruction, they are apt to experience more joy than the true warrior, for then comes the harvest of gain.
Read more

Arming the Buckeyes: Longarms of the Ohio Infantry Regiments

A common question that comes up in conversation about Civil War Buckeye regiments is "What were they armed with?" We are fortunate in that the state of Ohio kept good records of how the regiments were armed when they went into service, this being especially true for those regiments which went into service in 1861 and 1862. The state adjutant general's reports for 1861 and 1862 have been heavily drawn upon to construct this article, as well as consultation with Phil Spaugy who has done extensive research on how Ohio's troops were armed during the war.      Buckeyes carried a fairly wide variety of weapons into the field, and the below article breaks this down into weapons of both domestic manufacture and imported arms. The early days of the war found the state of Ohio practically bereft of longarms; as an example, when the 1st and 2nd Ohio Volunteer Militia left the state in late April 1861, they left unarmed, being armed at Lancaster, Pennsylvania on their way to
Read more

Dressing the Rebels: How to Dye Butternut Jeans Cloth 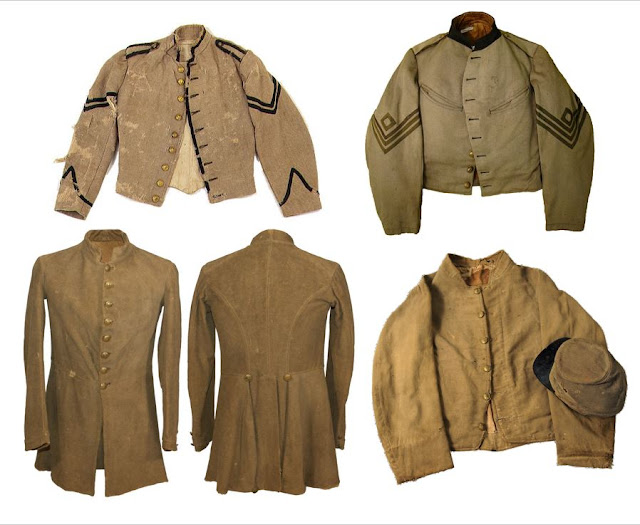 In the early days of the Civil War,  the Southern states found themselves with an abundance of cotton but a shortage of cloth with which to make army uniforms. The trade in cloth prior to the war had largely been to send raw cotton or wool north to New England (or Great Britain) where it was converted into usable cloth; but now that trade was broken and the Southern states were thrown upon their own resources in their efforts to properly clothe the Confederate army.  This collection of Confederate enlisted men's frock coats and shell jackets gives some indication of the variety of shades of butternut worn during the war. All of them are shades of yellow brown, some heavier on the yellow and some heavier on the brown. The blue used around the collar or as rank insignia indicates that the soldier was in the infantry. Surviving Confederate uniforms are considered rather rare and command quite a healthy price in the collecting market. For an in-depth study of how Confederate jacke
Read more

A Buckeye Remembers Scenes of Horror After the Battle of Corinth 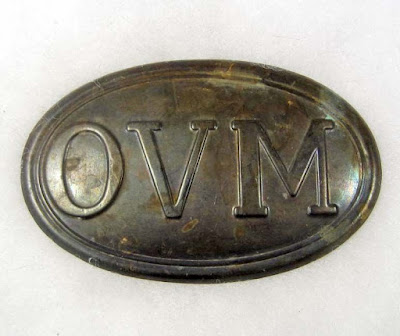 In the aftermath of the Battle of Corinth, Private James E. Graham of the 80 th Ohio walked over the field and recorded the hecatomb that spread around him. “The bodies of men I did not enumerate. In fact, their ghostly looks were sufficient to drive away all thoughts of minor affairs. Their faces, bodies, and limbs were all swelled almost to bursting and the skin was very dark blue. Their eyes were all closed and mouths generally a little open. They were lying in almost all shapes imaginable. One man had a limb shot off at the thigh and it was thrown right back over his shoulder. One was lying on his back with both legs bent back under him.   One had one of his legs doubled under him and the other stuck out straight; in fact, they were laying every way that looked painful. But the most horrible sight presented to me was that of a young Rebel lying at a house on the battlefield,” remembered Graham. What followed for the readers of the Tuscarawas Advocate in 1862 is perhaps the m
Read more

Mauled at Resaca: Eight Fatal Minutes for the 36th Alabama 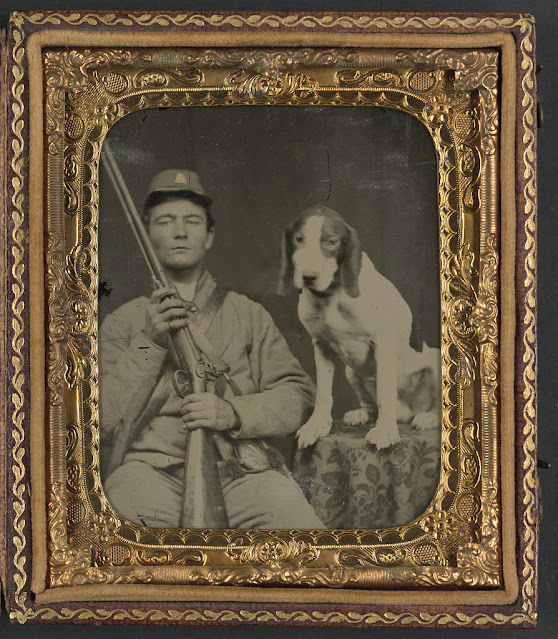 The following letter, written by Orderly Sergeant Robert J. Davidson of Co. H of the 36 th Alabama Infantry to his wife Clara, never reached its intended recipient. Davidson’s letter, a superb account of the Battle of Resaca, was inadvertently left behind the lines at Calhoun, Georgia and picked up by an Illinois soldier who sent it back to Clinton, Illinois for publication in the local newspaper.           The 36 th Alabama Infantry was mustered into service in May 1862, spending the first year of its service as part of the garrison of Mobile, Alabama. It joined the Army of Tennessee prior to the Tullahoma campaign and was placed in an all-Alabama brigade under General Henry D. Clayton along with the 18 th , 32 nd -58 th Consolidated, and 38 th Alabama Infantry regiments. During the Battle of Resaca, Clayton’s Brigade was part of Major General Alexander P. Stewart’s Division of Hood’s Corps. As Davidson describes in his account, the 36th Alabama charged outside of their breastwo
Read more